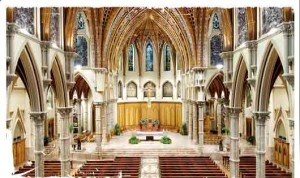 One of the largest and most impressive holy places in the Archdiocese of Chicago, Holy Name Cathedral is not only the mother church of the region, but also the focal point of an active Roman Catholic community in the heart of the city.  Founded originally as the Chapel of the Holy Name in 1846, it was once part of Saint Mary of the Lake University before that institution moved to the suburbs. As Chicago’s population exploded, a new chapel was built a block south of the present building’s location. That was only sufficient for a short time, and a few years later a new facility was erected across Superior Street from the current Holy Name Cathedral.   The 1854 structure was a huge church, with a spire reaching 245 feet into the sky. It opened on Christmas Day, 1854 and five years later it was named the diocesan cathedral. The glory was short-lived, though. The cathedral was one of hundreds of buildings destroyed in the Chicago Fire. 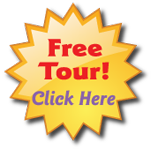 HISTORY:  Located in Chicago, Illinois, Holy Name Cathedral replaced the Cathedral of Saint Mary and the Church of the Holy Name, both destroyed by the Great Chicago Fire in October 1871. The cathedral was finally dedicated on November 21, 1875. Pope John Paul II became the first Pontiff to visit Holy Name Cathedral in October 1979 for a prayer service with Chicago’s bishops and as well as a concert featuring the music of Luciano Pavarotti and the Chicago Symphony Orchestra in the nave of the cathedral.

Holy Name Cathedral was built in the Gothic revival architectural style while at the same time integrating motifs symbolic of the message of the modern Church. The church building is 233 feet (71 m) long, 126 feet (38 m) wide and can seat 2000 people. The ceiling is 150 feet (46 m) high and has a spire that reaches 210 feet (64 m) into the sky. Overall, the cathedral features motifs meant to instill an ambience of physically dwelling in the biblical “Tree of Life.” The first feature that greets worshipers are massive bronze doors designed by Albert J. Friscia that weigh 1200 pounds each. The doors introduce the overall “Tree of Life” theme with intricate details that serve to make the doors look like overwhelming planks of wood. The doors possess a hydraulic system that allows them to be opened with the push of a finger. Beyond the doors is a vestibule encased in glass. 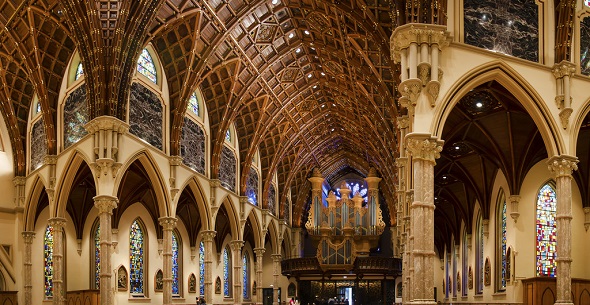 Timeline
1846: The Chapel of the Holy Name opened at Saint Mary of the Lake University in what is now Chicago’s Near North Side.
1849: An independent Chapel of the Holy Name was erected on North State Street between East Superior Street and East Huron Street.
December 25, 1854: The new Holy Name Church was built at North State and East Superior Streets.
1859: Bishop James Duggan elevated Holy Name to cathedral status.
1871: The cathedral was destroyed in the Great Chicago Fire.
1874: Construction began on the current cathedral.
1875: Construction finished on the current cathedral.
1890: Foundation problems lead to a near total reconstruction of the cathedral, including replacing the buttresses and bracing the steeple.
1939: When Cardinal Mundelein died the State Street Subway was being built. The street had to be quickly rebuilt for the funeral.
1968: The cathedral was gutted for foundation repairs and at the same time a chapel was added and the interior redesigned to accommodate changes in the mass promulgated by Vatican II.
1979: Pope John Paul II attends two concerts at Holy Name Cathedral, one featuring Luciano Pavarotti, and the other the Chicago Symphony Orchestra.
February 13, 2008: The cathedral closed after a chunk of the ceiling came loose and fell 70 feet onto the pews below. No one was hurt.
November, 2008: The cathedral reopens to the public.
February, 2009: The cathedral’s gift shop closed.
February 4, 2009: Fire broke out in this cathedral the early morning hours.

Holy Name Cathedral is located on the northeast corner of State and Superior streets, about one-half block south of Chicago Avenue, a major traffic artery. The Cathedral is three blocks west of Michigan Avenue, and an easy walk from the historic Water Tower. Parking: Some free parking is available in the Cathedral lot across State Street.

The No. 36 Broadway CTA bus stops at Chicago and State, just a half block from the Cathedral’s front doors. Visitors taking any of the Michigan Avenue buses – such as the 151, 147, 146 and others – should get off the bus at Chicago Avenue and walk west to State Street. At State, turn left and you’ll be only steps away from the Cathedral’s front doors. Visitors using Chicago’s subway system should take the Red Line/Howard train and exit at Chicago and State. If possible, take the stairwell marked “southeast corner” when leaving the station. Whatever exit you use at Chicago & State, once you reach street-level, the Cathedral will be in sight.