It is almost time for the FREE Christmas Tree Lighting Ceremony in Downtown Chicago this Thanksgiving Weekend.  This year marks the 102nd anniversary of the 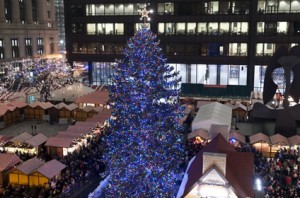 Chicago Christmas Tree, so we expect a some pretty special stuff during this event. The ceremony begins at 6 pm on November 24th in MIllennium Park (moved from Daley Plaza this year), although you can also watch from the comfort of your home (which you may want to do if it’s typical November weather!).    Welcome the 102nd Chicago Christmas Tree to a new location in Millennium Park, a location recognized around the world for it’s architectural landmarks and cultural programming.

The 102nd Annual Christmas Tree was donated by the Voelker family of Northlake, Illinois. Their 63-foot Colorado Spruce was selected out of 130 submissions, and they will join Mayor Rahm Emmanuel to light the tree at the official Tree Lighting Ceremony on November 24.

The 102nd Tree Lighting Ceremony is presented byt eh Department of Cultural affairs and sponsored in part by the Chicago Cultural Mile Association. Additional support provided by 93.9 MY FM and the Chicago Transit Authority. The lights adorning the Christmas tree are donated by IBEW Local 134.

dmission to the Tree Lighting Ceremony and all other holiday activities in Millennium Park is free.