Check out this really good cheap airfare of $495 RT from Chicago and New York to Munich, Germany via LOT airlines and their fleet of Boeing 787s.

Munich —  Munich, located in the South of Germany, is the capital ofBavaria and the gateway to the German Alps. München, the city’s native name, is derived from the Old German word Mönche (“monks”) and traces back Munich’s origins as a Benedictine monastery in the 8th century.   Today, Munich is famous for its interesting mix of traditional Bavarian culture, modern living, and high tech industries.     Contemporary architecture goes hand in hand with grand avenues, first-class museums, and baroque palaces. They are a salute to Munich’s royal past: Bavaria was ruled for more than 750 years by the kings of the Wittelsbach Dynasty.

Munich – Airport:   Munich’s International Airport, Franz Josef Strauss Flughafen, is the second busiest airport in Germany after Frankfurt. In 2009, Munich Airport was voted 2nd “Best Airport in Europe” and fifth-best in the world.
Located 19 miles northeast of Munich, the airport is very well connected to the city: Take the metro S8 or S2 to reach Munich’s city center in approximately 40 minutes.

My favorite way of getting around in Munich? Walking. You’ll find many sights and museums in the historic heart of the city, most of them within short walking distance from one another.

Munich – What to See and Do:

Although Munich was damaged in World War II, the Old Town of the city has been carefully restored to its original splendor. 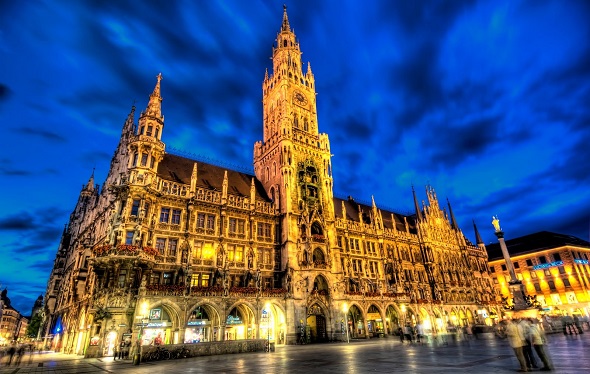