The Chicago theatre scene is a leader in the U.S. with more than 250 theatres throughout Chicagoland, comprising a rich and varied community ranging from storefront, non-union theaters to the most renowned resident theatres in the country, including 5 that have been honored with Regional Tony Awards, and the largest touring Broadway organization in the nation. Chicago’s theatres serve 5 million audience members annually and have a combined budget of more than $250 million. Chicago produces and/or presents more world premieres annually than any other city in the nation. In the 2014-2015 season, Chicago theatre companies produced more than 100 world premiere productions and adaptations. Each year, Chicago theatres send new work to resident theatres across the country, to Broadway, and around the world.

Special Offer: Take Lyft to Chicago Theatre Week performances! If you’re new to Lyft, click here to sign up and get one free ride up to $20, or use the credit code STEVE743651 after signing up. This year the League of Chicago Theatres has developed a number of FREE special events as part of Theater Week. All these events are free, open to the public, and will take place at Theatre Week Central, located in the historic Water Works Building at 163 E. Pearson. In addition the League is offering tours of Chicago theatres and theatre districts–some free, others with a fee. 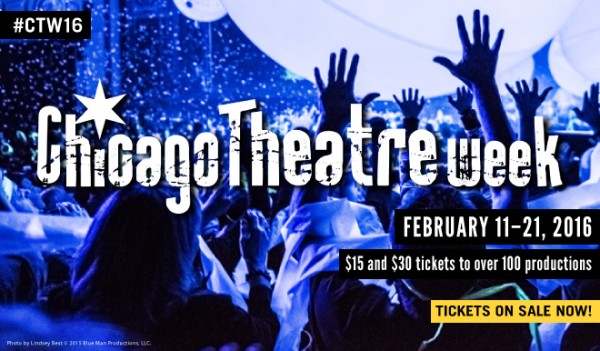 In addition to offering tickets at $30, $15, or less to over 115 productions across the city the League will also host a series of FREE audience engagement events at Theatre Week Central, located in the historic Water Works Building, 163 East Pearson in Chicago.    The League of Chicago Theatres will be hosting a series of FREE special events as part of Theatre Week to help audiences further engage with Chicago’s extraordinary range of theatrical offerings. Events include lunchtime Showcases featuring short performances, artist chats, and more; a Staged Reading of Stage Left Theatre’s The Body of An American by Dan O’Brien, directed by Jason A. Fleece; and Playwrights at Work, which allows audiences to watch the creation of the next great Chicago play in real time. All events are free, open to the public, and will take place at Theatre Week Central (163 E. Pearson, along the Magnificent Mile).   The Theatre Week Central event schedule is as follows:

Fridays, February 12 and 19 at 12 pm —  Lunchtime showcase events featuring short performances, artist chats, and more. Audiences are encouraged to arrive early and bring a lunch. These events will be no longer than 45 minutes.

Stage Left Theatre’s production of  The Body of an American

Saturday, February 20, 2016 at 2 pm — Stage Left Theatre will present a free staged reading of The Body of an American by Dan O’Brien. Directed by Jason A. Fleece, the cast includes Don Bender and Ryan Hallahan.
In 1993, Canadian photojournalist Paul Watson took a Pulitzer Prize-winning photograph of a dead American soldier being dragged through the streets of Mogadishu. In 2007, writer Dan O’Brien was struggling to finish his play about ghosts. A chance encounter over the airwaves sparks an extraordinary friendship that sees the two men journey from some of the most dangerous places on earth to the depths of the human soul. Flying from Kabul to the Canadian Arctic, The Body of an American sees two actors play more than thirty roles in an exhilarating new form of documentary drama.

Following the success of the Storefront Playwright Project in 2013-2015, the League of Chicago Theatres is again supporting and providing space for nearly 20 emerging and established playwrights to work on a current writing project in view of the public. From a large screen facing outward, visitors will be able to read what the playwright is writing and watch the creation of the next great Chicago play in real time. The aim of the project is to raise the visibility of playwrights in Chicago and encourage audiences to engage more deeply with Chicago theatre and the creative process of writing a new play for the theatre. Participating Playwrights at Work include: Randall Colburn, Philip Dawkins, Ike Holter, Evan Linder, Jessy Lauren Smith, Laura Stratford, Regina Taylor, Calamity West, and more.

THEATRE TOURS –    The League will also present a variety of public tours of the Belmont Theater District, the Auditorium Theatre, Broadway in Chicago, and the Lyric Opera of Chicago. Please note that the Theatre Tours will take place on location, not at Theatre Week Central.

The Chicago Theatre Week Tour Schedule is as follows:

Monday, February 15 at 10:30am – Tickets: $12 –  Go behind the scenes of this National Historic Landmark, built by Dankmar Adler and Louis Sullivan, and view it as few do. Enjoy the radiant 24-karat gold-leafed ceiling arches, hundreds of Sullivan’s beautifully restored intricate stencil patterns, ornate gilded and bas-relief designs, and the endless floor and wall mosaics and murals by Charles Holloway and Albert Fleury. February 11, 15 and 18. For reservations and more information visitwww.auditoriumtheatre.org.

Saturdays, February 13 at 20 at 11am – Tickets: $12 – Each public tour visits two of the three Broadway in Chicago theatres: the Oriental Theatre, the Cadillac Palace and The PrivateBank Theatre. The tour showcases the glittering vintage décor inspired by the foremost theatre designers of our time, who created through their designs in the French Renaissance styling. Visitors will also learn about the cutting edge technology that makes each theatre the home to today’s most complex theatrical productions and the recent restorations that brought beauty and elegance back to these century-old theatres. For reservations and more information visit www.broadwayinchicago.com.

Saturday, February 20 at 2pm –  Explore the burgeoning Glenwood Avenue Arts District during Chicago Theatre Week and take a special walking tour of the theatres on Saturday, February 20 at 2 pm. The tour will begin at Lifeline Theatre (6912 N Glenwood Ave) before heading north on Glenwood Ave to Theo Ubique and finishing up at BoHo Theatre. Tour each of the theatre’s unique spaces and learn more about their programming and how they use their spaces. Approximately 60 minutes.Click here to register for the FREE tour.

Sunday, February 21, 2016 – Tours depart within half hour time slots between 11am and 2pm – Tickets: $45 — Journey into the heart of opera at one of Lyric Opera of Chicago’s Backstage Tours. This 2 hour and 30 minute 10-stop walking tour will be guided by professional staff and trained volunteers, peppered with interesting discussions and demonstrations by experts in various staging areas. For reservations and more information visitwww.lyricopera.org.

About the League of Chicago Theatres

The League of Chicago Theatres is an alliance of theatres which leverages its collective strength to promote, support, and advocate for Chicago’s theatre industry locally, nationally, and internationally. The League of Chicago Theatres Foundation is dedicated to enhancing the art of theatre in the Chicago area through audience development and support services for theatres and theatre professionals.

How do I take part in Chicago Theatre Week (CTW)?
Attend a show! Specially-priced tickets for CTW performances are now on sale for performances February 11-21, 2016. There are limited quantities available, so it is strongly recommended that you purchase tickets in advance. All participating shows and offer details are listed on this website.

Do tickets need to be purchased in advance?
It is highly recommended that patrons purchase their Theatre Week tickets in advance. Tickets are on sale now and are first come, first served. Please be aware that some shows will sell out quickly, but with over 115 participating shows, it’s a great opportunity to see something NEW!

I would like to visit Chicago for Chicago Theatre Week. Where should I stay?
There are special Chicago Theatre Week hotel room rates available at the Sheraton Grand Chicago Hotel, dana hotel and spa, and Radisson Blu Aqua Hotel in downtown Chicago. There is a link to more information in the “Special Hotel Offer” box above.