Join this celebration of women in the arts with this free off-night performance showcase on February 22nd in Chicago in collaboration with Beast Women, the All- Female Performance Variety Revue. With performances including theater, music, aerial arts, dance, spoken word, and many others, this one night only performance celebrates some of the greatest artists in Chicago and beyond.   From the playwright and director to the designers and actors, the creative team behind Sarah Gubbins’ Cocked is comprised mostly of women. Unfortunately, this isn’t as common among regional theaters as gender parity in the arts is far from equitable. 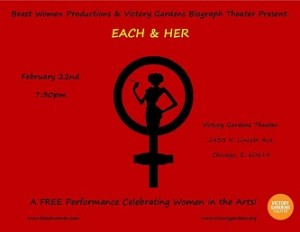 See Each & Her – Free Performance Celebrating Wome… on Evensi