Check out this free Chicago movie screening of THE MAN WHO KNEW INFINITY, starring Jeremy Irons and Dev Patel from SLUMDOG MILLIONAIRE.  ‘The Man Who Knew Infinity’ is based on the true story of Indian mathematical genius Srinivasa Ramanujan.   STORY:  An autodidact, he earned admittance to Cambridge University during WWI, where he became a pioneer in mathematical theories.    The film stars ‘Slumdog Millionaire’‘s Dev Patel in the lead role. “It was actually a very triumphant story for me, a very enlightening film and I wanted more people to know about it, because I didn’t know about this incredible man. If I could help breathe life into his legacy, then I was happy to do so and that’s what he did,” says the actor.     Patel’s character faces enormous challenges including racism, rejection and serious illness. While there is no record of Ramanujan speaking, Patel says he was able to base his character on photographs of the mathematician and on his notebooks: “There was no real physical material that we could mimic, there was no found footage or anything of how he spoke. “You know, the cliché says: ‘A picture says a thousand words’, but it really is true.    “We tried to capture the essence of this man and his resilience, that you could see in the pictures, you could read in the book. He was fiercely passionate and that’s something I could really dial into – and I hope we did it justice,” explains Patel.

CLICK HERE and enter the information  for an admit-two pass to an advanced screening on Wednesday, April 27, 7:00PM in Chicago. Please do not enter if you know you cannot attend a screening at this time. Winners will be notified via email. Seating will be granted on a first come, first served basis. Passes do not guarantee admission. All screenings are overbooked per studio policy. 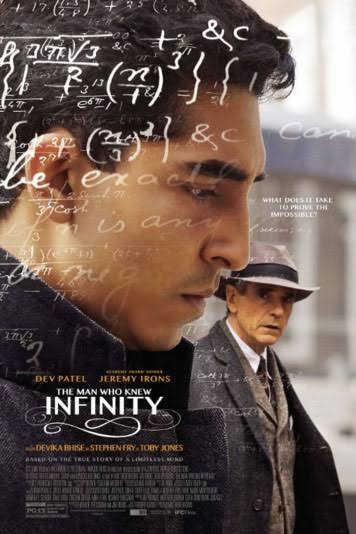 NO PHONE CALLS, PLEASE. NO PURCHASE NECESSARY. VOID WHERE PROHIBITED OR RESTRICTED BY LAW. All federal, state and local regulations apply. Entries must be received by 4/26 via this form. Winners will be selected via a random drawing and notified by email. One prize per person per household. Employees of all promotional partners, their agencies and those who have received a prize within the last 90 days are not eligible. IFC Films, Allied-THA and their affiliates accept no responsibility or liability in connection with any loss or accident incurred in connection with use of a prize. A recipient of prizes assumes any and all risks related to use of prize and accepts any restrictions required by prize provider. Prizes cannot be exchanged, transferred or redeemed for cash, in whole or in part.