The Chicago Dancing Festival proudly celebrates its 10th anniversary of FREE programming featuring performances by leading ballet, modern and contemporary dancers from across the country, August 23-27, 2016. Just as the Festival draws from top dance companies, this year’s program will once again be presented in Chicago’s top downtown venues including the Harris Theater for Music and Dance, the Museum of Contemporary Art and the Jay Pritzker Pavilion at Millennium Park plus the highly anticipated return to Chicago’s Landmark Stage, the Auditorium Theatre.   Co-produced by renowned choreographer Lar Lubovitch and highly esteemed Chicago dancer Jay Franke, the Chicago Dancing Festival has provided increased accessibility to dance and raised Chicago’s profile as a premiere dance destination. Over the last decade, the Festival has presented more than 100 exceptional dance companies from Chicago and around the world, commissioned eight World Premieres by local and national artists, and performed before more than 90,000 people while maintaining FREE admission for all.

Highlights of the 2016 Festival include:

A Chicago Dancing Festival company debut by Pennsylvania Ballet, one of the nation’s leading ballet companies.    For the first time, an evening-length program devoted to “Modern Men” featuring performances by all male dancers including Festival debuts by international choreographer and founder of MOVE: the company, Joshua Beamish and Bessie Award-winning modern dancers Rashaun Mitchell and Silas Riener. Modern Men will also feature performances by critically acclaimed artist and Choreographer in Residence at the Harris Theater for Music and Dance Brian Brooks and the popular returns of Rennie Harris Pure Movement and Aszure Barton + Artists.

Here are the standout shows not to miss:

“Modern Men” at the Museum of Contemporary Art,  Aug. 24

Dance often gets classified as a mostly feminine pursuit, but there are plenty of male dance troupes that challenge that stereotype. “Modern Men” presents a selection of some of the country’s most innovative male dancers, showcasing five different groups in the hour-long program. Azure Barton + Artists, Brian Brooks, Joshua Beamish Rashaun Mitchell and +Silas Riener and Rennie Harris Pure Movement will perform for two shows at 6 p.m. and 8 p.m. Advance tickets are already gone so show up an hour before the performance for standby tickets.

No tickets are required for this three-hour celebration of globally focused dance companies based in Chicago. The performance also commemorates the 100th anniversary of navy pier and highlights South African gumboot dance from Forward Momentum Chicago, Indian classical dance from Nataya Dance Theatre, Caribbean and African dance from Muntu Dance Theatre of Chicago and tap and percussive dance from Chicago Human Rhythm Project. The presentation starts at 5:30 p.m. 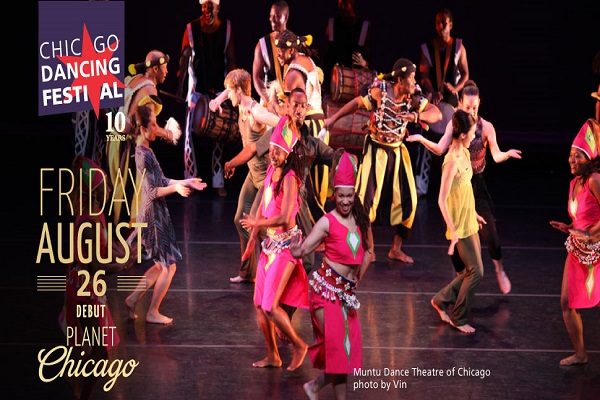 Dancing Under The Stars at Millennium Park, Aug. 27

The closing event for the fest unfolds at the Jay Pritzker Pavilion with the show projected on a video screen for lawn patrons. The rousing performance features Chicago faves Randy Duncan, Hubbard Street Dance Chicago and Joffrey Ballet joined by the Pennsylvania Ballet, Royal Ballet and Rennie Harris Pure Movement. The two-hour finale starts at 7:30 p.m. and promises to be a memorable finish to the highly anticipated festival.

“Dancing Under the Stars”

Additional details for the 2016 Festival, including repertoire, to be announced soon. All programs are subject to change.

All events are free and seating is general admission, however, tickets for indoor events are required and must be reserved in advance.