The Division Street Entertainment District, Chicago’s Party Headquarters, is teaming up with ESPN’s Dave Kaplan and his CSN post-game on-air partner and former Cub, Todd Hollandsworth, to throw a pre-playoff Pep Rally on October 6.  Sponsored by Buona, The Official Beef of the Chicago Cubs, and Bud Light, the rally will celebrate the success of our lovable Northsiders, a team that is statistically one of the all-time great teams in baseball history.  Party like it’s a new era in Chicago baseball on Division Street’s iconic bar strip: Butch McGuire’s, She-Nannigan’s, The Lodge, Hopsmith Tavern, Original Mother’s, Mother’s Too, The Hangge-Uppe and Coconutz! The strip will be drenched in Northsider blue and bars will be filled with music, drink specials and plenty of themed banners and decorations. Look for surprise guests including former players and the inimitable Ronnie “Woo Woo” Wickers.

Chicago’s original Italian beef will support the city’s original baseball team with free beef sandwiches. At 10 p.m., Buona and Kaplan will help distribute 108 Italian beef sandwiches to EACH participating Division Street bar (the 108 coincides with the number of years it’s been since the Northsiders won the championship). That total comes to over 800 FREE sandwiches! There will also be free fan SWAG including commemorative Cubs glassware from Bud Light and other freebies from Buona and the Division Street bars.

Guests are encouraged to show their fandom by decking out in Cubs gear. Kaplan will choose eight of the most audaciously dressed fans to partake in a trivia contest.  The winner will receive a prize that any Cubs fan would covet. 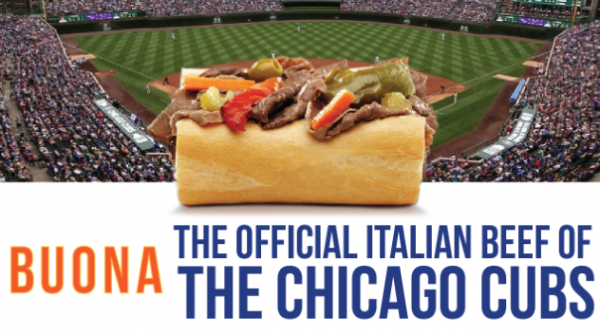