Check out these really cheap flights from Chicago to Manila, Philippines — Just $443 RT in November.  As you can see below, there are lots of low prices in November and December from Chicago.  Or go to Hong Kong for just $459 RT in Nov/Dec.  As the city center of the Philippines, Manila is a dense stew of urban development and historic sentiment.  Manila is an interesting place to visit.  Manila, the capital of the Philippines, is a densely populated bayside city on the island of Luzon, which mixes Spanish colonial architecture with modern skyscrapers. Intramuros, a walled city in colonial times, is the heart of Old Manila. It’s home to the baroque 16th-century San Agustin Church as well as Fort Santiago, a storied citadel and former military prison.

It’s cosmopolitan and chameleonlike, equal parts cool and kitsch, and animated with an irrepressible vitality that’s capable of reinvigorating even the most world-weary among us. Yet for many folk Manila remains a city less traveled, because its myriad attractions are obscured by a flawed p.r. machine. The city’s cultural gumbo of Malay, Spanish, American, Chinese and Arabic influences is heady and rich, but takes a while to fully appreciate. As in many developing-world cities, the traffic is stifling, the poverty pervasive and the urban sprawl daunting. But it’s the Philippine capital’s very elusiveness that gives it the edge over places that readily reveal their spoils. Embrace its beautiful chaos, even for just a day, and you’ll be rewarded.

Even within heritage districts such as Rizal Park and Intramuros, you won’t be far from a branch of local fast-food giant, Jollibee. University students pile out of kalesas, then walk the old fort’s walls to get to class. The Light Rail Transit (LRT) trundles past as families picnic on Luneta park grass.    Like passengers in a jeepney, the past, present and future sit shoulder to shoulder, flying down Manila’s streets. Get on the same ride. You can sit back, safe, as the city flashes past you. Or you can put your head out, let your hair fly in the wind and see where the city takes you. 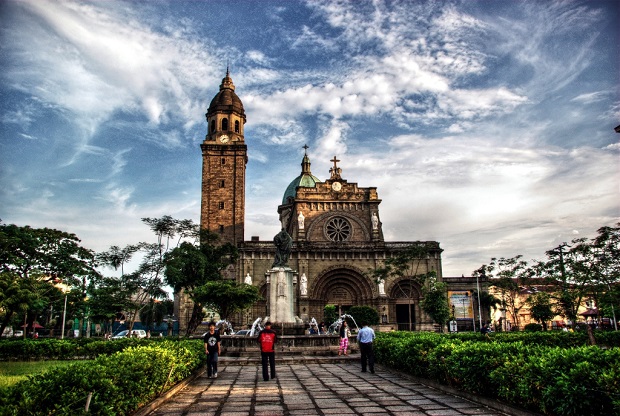 When the Spaniards arrived in the 1500’s, they built a walled city in place of the kuta (fort) of Rajah Soliman. This city is now known as Intramuros, one of the best models of a medieval fort outside Europe.    Intramuros contains the UNESCO World Heritage Site San Agustin Church and the San Agustin Museum. The compound contains fine religious artifacts and relics from the Galleon Trade — from treasure chests to ivory santos (saints) to gold embroidered vestments. Juan Luna, one of the greatest Filipino painters, is interred here. Casa Manila, a lifestyle museum replicated from an 1800’s home, is also in the area. The guards and the owners of the calesas (horse-drawn carriages) are dressed in period costumes so take a picture with them. They’ll be all smiles with you.    If you want the juicy stuff, join Carlos Celdran’s Walk This Way tour of the walled city. He certainly makes history alive with his off-the-books anecdotes.  This is the stuff that they don’t teach you in schools.     The Philippines’ first hotel is also located here. Established in 1912, the Manila Hotel is grand, classic, and historical, having hosted famous personalities like Gen. Douglas MacArthur, Marlon Brando, and The Beatles.