Chicago will be honoring our World Series champion Chicago Cubs with a Chicago parade on Friday, Mayor Rahm Emanuel said today.   The mayor said the parade will be held “around 11am-noon  but specifics are being worked out as we speak,” he said.  Emanuel said there will be “a parade to stand the test of time.”  The mayor had no specifics on the route, telling reporters “just stand in the middle of the street somewhere and you’ll see it.”    Asked whether the Chicago River will be dyed blue, he said he would like to do that, but wasn’t certain if it would work. “I want to do a lot of things,” Emanuel said.

The city had been planning to hold a parade on Monday if the Cubs won Game 7, but the team asked to move it up to Friday, a City Hall source said.  Wearing a Cubs championship hat that he said he grabbed on the field during the celebration in Cleveland, Emanuel repeatedly pleaded for understanding, noting he only got 1 1/2 hours of sleep after getting back to Chicago.

Here are some more details, courtesy of the Sun Times:

The route includes Addison Street east from the ballpark, then Lake Shore Drive to Michigan Avenue, The official procession will travel along Michigan Avenue between Oak and Ohio and then along Columbus between Monroe and Balbo before heading to Grant Park. Fans who want to catch the downtown parade are encouraged to see them along this route.  The city didn’t release some of the cross streets to make the connections to the larger arterials.

Officials expect the Cubs motorcade to arrive in Grant Park around noon Friday, when there will be a rally at Hutchinson Field at Grant Park. The rally and parade come two days after the team won its first World Series championship in 108 years.

The city says closed water bottles will be allowed into the rally and food vendors will be on site.

The Sun Times also noted that there will be a “zero tolerance” policy on drinking on public sidewalks and streets. We’ll see how well that one plays.   The free rally will include security screenings at entrances at Michigan Avenue and Jackson Boulevard, and a Michigan Avenue and Congress Parkway.

The city offered suggested sites to view the parade. They are:

There will be street closures along the route, with some starting as early as 4 a.m. Friday. The city did not detail the closures or the times.

Anyway, it’s worth noting that Grant Park is the same place where the Chicago Blackhawks, of the National Hockey League, held their trio of championship rallies. The Cubs can only hope they’ll get to know the route as well as (or better than) the Blackhawks.

CBS Chicago will be streaming the parade live. You can view that here.

But, the Cubs are pressing the city to move it up to Friday for two big reasons. After an exhausting climb back from a 3-to-1 deficit, some of the Cubs players are eager to leave town on vacation.   And Major League Baseball is scheduled to start its general managers’ meetings on Monday in Scottsdale, Arizona.   That means the Theo trio — President of Business Operations Theo Epstein, General Manager Jed Hoyer and Jason McLeod, senior vice-president of player development and amateur scouting — would likely be unable to attend the rally.

Although time is short, sources said the Emanuel administration is trying its best to accommodate the team and still hold a civic celebration worthy of a team that just ended a 108-year wait that was the longest drought in the history of professional sports.  The bottom line is the parade and rally is most likely to take place on Friday. But the precise route and time are yet to be determined.   One advantage for a Friday parade would be that Chicago Public Schools students won’t have to cut class to be there — the district already has scheduled a day off on Friday for what is called a “School Improvement Day.” Most staff will still be at work, but students won’t be in class 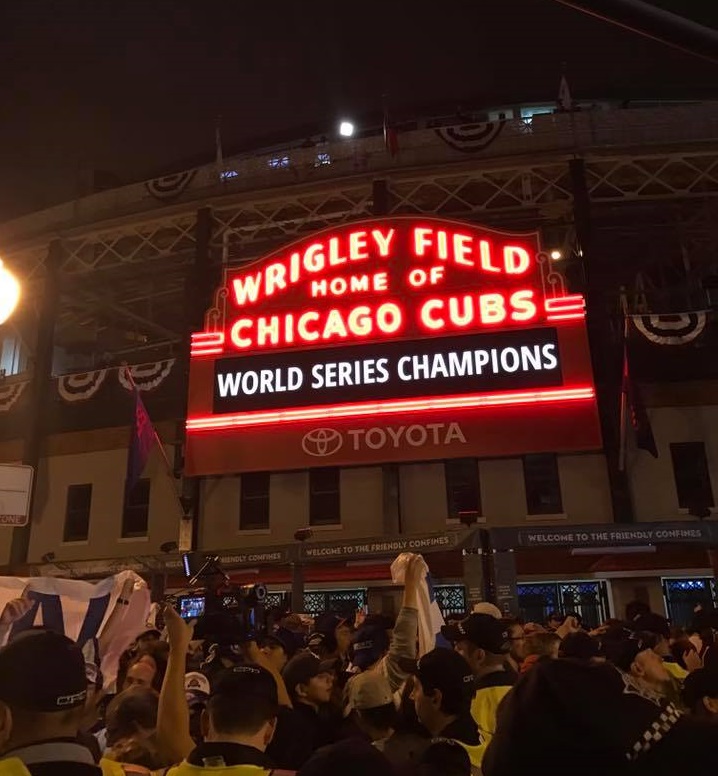