Just in time for Black Friday, Amazon’s discounting 1-year Prime memberships to $79 today, for new members only.   Until  Friday night, November 18th at 11:59 p.m., Pacific Time, eligible new members can join Amazon Prime for $79 plus applicable taxes for the first year and enjoy member-only benefits and content, including The Grand Tour. Although the price in your cart will show $99, the promotion discount will be applied at checkout. You will be charged when you place your order. You Can Watch The First Episode Of The Grand Tour Right Now 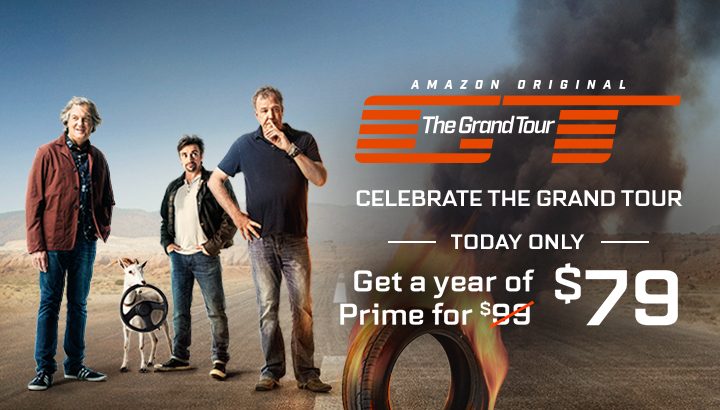 It was never really extremely clear when, exactly, the first episode of Jeremy Clarkson, Richard.   In the past, there have been loopholes for existing members to take advantage of these sporadic Prime discounts, but unfortunately, that doesn’t seem to be the case this time around. That said, if you still haven’t yet joined Prime, this is a fantastic opportunity.

WHAT DO YOU GET FOR YOUR PRIME AMAZON MEMBERSHIP?

We’ve compiled a rapidly expanding list of benefits that you get with your membership, including free two day shipping, access to thousands of streaming TV shows and movies (including…The Grand Tour), 20% off video games, free Kindle ebooks, and a whole lot more. It’s the best deal in tech even at $99, so you shouldn’t hesitate at $79

Free Two-Day Shipping (Or Same Day, Or One Hour)

Amazon Prime is best known for its free two-day shipping. Their shipping estimates are highly reliable, and if you don’t need your items right away, you can choose a slower shipping method and get yourself some kind of credit (categories and values rotate). You might even be able to trick the system into giving you the fast shipping and the credit. If Amazon does fail to get you your items on time, you can get get your Prime membership extended.

Residents of a few major cities can now select same day delivery, and also take advantage of the new Amazon Fresh grocery delivery service, while those outside of the current range of Amazon Fresh can still use Amazon Pantry.

Amazon Video Now Has Offline Playback For Prime Subscribers, See Ya Netflix
For the first time on any subscription video service, Amazon Prime subscribers will now be able to…

Amazon and JetBlue have also announced a partnership to offer Prime members free access to Prime Instant Video during their flights, along with free faster Wifi.

Forget Best Buy’s Gamer’s Club Unlocked, Amazon is building a 20% discount on video game preorders that extends for two weeks after the game’s release right into your Prime Membership. What’s more, most recent releases can be traded in to Amazon for upwards of $40 if you finish with them quickly. You could easily make money on this deal.

This discount stacks with the 5% back you get with your Amazon Store Card that we discuss below.

If you’re a Prime member, anything you watch on Twitch will be ad-free, and you’ll also get access to some free games and in-game items.
Amazon Prime Music

Amazon Prime Music boasts “one million free songs” for Prime subscribers. Like the comparison between Netflix and Prime Instant Video, whether Prime Music has everything you need is subjective, but if it does, you could cancel your subscription to services like Spotify, or at least knock them down to the free tier, further ameliorating the cost of Prime.
Audible Channels

While the audiobook store Audible is primarily a separate service from Amazon Prime, Prime members do get free access to Audible Channels, which includes a selection of spoken news stories, podcasts, and other short form audio content.
Unlimited Photo Storage

If you’re already paying for Prime you can store all of your photos in Amazon’s cloud for free, and then sync them to any device. Depending on what else you’re putting in various clouds, this bonus might enable you to stop paying for the premium tiers of whatever storage services you’ve been using.

You also get 5GB of storage to use for whatever you want, in addition to the unlimited photo storage. If most of your cloud-stored files are photos, you might be able to do away with premium tiers of other services like Dropbox and Google Drive. Plus, you can even invite up to five friends and family members to to share your space.

The Kindle Lending Library lets owners of Kindle devices who are also Prime subscribers borrow from a selection of over 600,000 books at no additional charge. The Kindle First program also lets users buy one of four “Editors’ Pick” e-books a month ahead of official release for $2 — or free, for Prime members.
Prime Reading

In addition to the lending library, Prime members can also download a rotating selection of over 1,000 books, magazines, and comics through the Prime Reading program. The selection is significantly smaller than the Lending Library, but doesn’t limit you to one download per month.

In the last several weeks Amazon has really ramped up their offering of exclusive deals for Prime subscribers, with steep video game preorder discounts as well as everything from sound bars to blenders.

At the same time, Amazon has made headlines with deep preorder discounts on their first-party hardware like the Fire Stick (a discount which made it our most popular product of 2014), and the Amazon Echo.

This year, Amazon launched Prime Day, a mid-year day of deals with all the agonies and ecstasies of a Black Friday. We have a hunch it won’t be a one time affair.

The Best Prime Day Deals
You’ve reached the hub for our Amazon Prime Day coverage. Below you’ll find all the best deals from …
Prime Store Card

A few credit cards have been offering cash back bonuses on Amazon for years, but Amazon recently rendered them all unnecessary with the Prime Store Card, which offers 5% cash back on every Amazon purchase year-round. That’s another 5% off on top of the great deals we cover every day on Kinja Deals.

Prime members get 6 months of Jeff Bezos’ paper of record, the Washington Post, a $60 value, for free. Once the 6 months expire, subscribers have the option to continue the Post subscription for $4/month, as compared to the usual $10/month.
Good To Know

Other Amazon Prime discounts are available to students, holders of certain credit cards, and AT&T customers.

Amazon has preorder price guarantee, doesn’t charge your card until an item ships, has a 30-day return policy, and will generally honor price changes within 7 days of delivery.

The Amazon Prime for Students rate—available to those with a .edu email address until graduation, including a six-month free trial—will is $49 annuallybut as a new Prime Student member, you receive a 6-month trial that includes FREE Two-Day Shipping on eligible purchases.  You get:

You’ll also receive unlimited streaming of thousands of movies and TV shows through Prime Video, access to unlimited photo storage through Prime Photos, as well as Student-exclusive deals and discounts. In addition, you get access to Twitch Prime, a collection of benefits on Twitch.tv including free game content, exclusive emotes and ad-free viewing; you also receive one free Twitch channel subscription during your no-cost trial, and one every 30 days as a Prime member. After your 6-month trial ends, your Prime Student membership makes you eligible to receive 50% off Amazon Prime, including all Prime benefits, for up to four years or until you are no longer a student. Prime benefits include: FREE two-day shipping on millions of eligible items, unlimited streaming of movies and TV shows, access to hundreds of playlists through Prime Music, access to unlimited photo storage with Prime Photos, and the ability to refer a friend to Prime Student and each receive $5. Unless you cancel, after you graduate or at the end of the fourth year of your Prime Student membership, whichever comes first, your subscription will automatically renew on its anniversary date into a full paid subscription for Amazon Prime at then-current rates.