At the beginning of each month (as well as all during the month), Netflix adds new movies and TV shows to its library. Below, you’ll find our December recommendations.

With the holiday season in full swing, Netflix returns with a healthy new batch of original films, comedy specials, and TV shows this December. The company continues to focus on its pledge to become 50 percent original content with a huge number of new options for streaming viewers as the year nears its end.  But it also has a lot of familiar movies on the list, including Marvel’s Captain America: Civil War, The Angry Birds Movie, as well as some new Netflix original television programs.

In TV land, Netflix will release the second seasons of its revamped sitcom Fuller House and popular Spanish-language soccer drama Club de Cuervos, along with the debut seasons of Archer-style animated spy comedy Pacific Heat and White Rabbit Project, a new unscripted series from the supporting cast of Mythbusters.     Comedy specials also abound this month, with new releases from Reggie Watts, Racardo O’Farril, and Gabriel Inglesias to keep you chuckling into the new year.     Those looking outside the house-made fare will be happy to see classic comedies like Animal House and cult films like Lucky Number Slevin making their way to the streaming service in December.    As always, some great movies will be heading into the ether by the year’s end, so be sure to catch American Beauty, Don’t Be A Menace, and Top Gun before they hit the pavement. 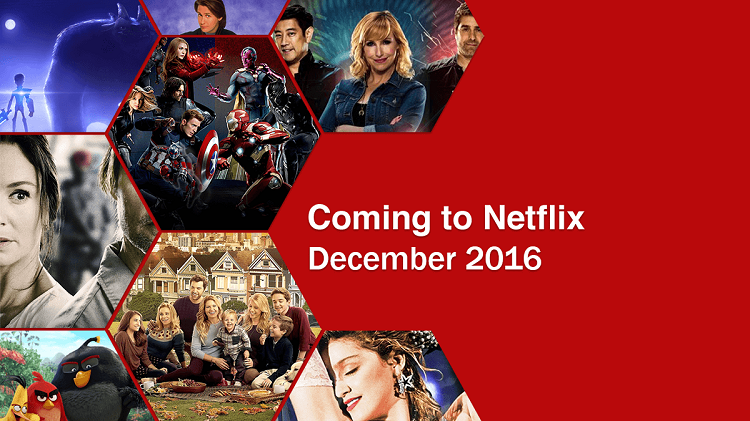 Below is the full list of fresh content you can see this December, and what will be leaving Netflix for the time being:

New on Netflix in December

However, we also have to say goodbye to some of our favorites, like American Beauty, Top Gun, Holes,  and Thor: Hammer of the Gods.