St Patrick’s Day in Chicago is like no other place.   From raucous pub crawls to lively parades and family-friendly festivals, there is no doubt about it:   There’s nothing quite like St. Patrick’s Day in Chicago. It’s a holiday when the Irish taverns are packed, jovial crowds jam the city streets and the Chicago River sparkles brilliant shades of emerald green. CLICK HERE FOR INFO

Turning the Chicago river green has been unique to Chicago for the past 43 years. Most people did not know that this is a privately funded operation, which gets more expensive each year. In 2017, the plumbers union will be turning the river green on Saturday March 11, starting at 10:00 A.M.!     This year they will be east of Wabash Ave, and west of Columbus Dr. The dyeing operation can be best viewed from the East side of the Michigan Avenue bridge, the West side of the Columbus Drive bridge or upper and lower Wacker Drive between Michigan Avenue and Columbus Drive. 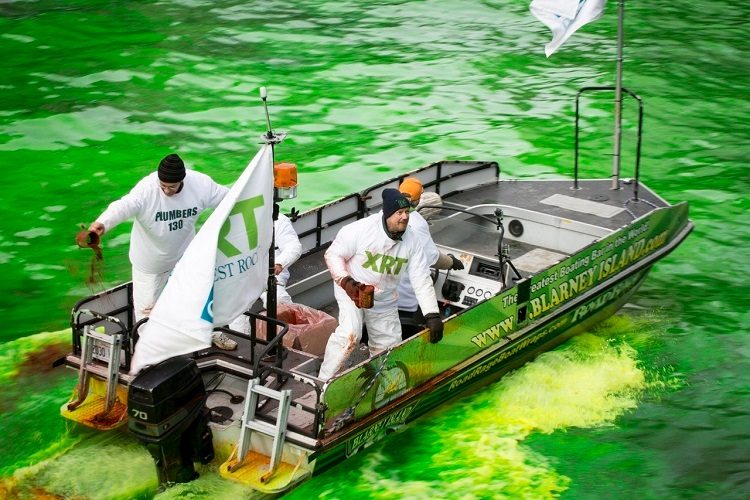 The dyeing of the river has been a tradition for many generations and attracts thousands of people dressed in green to see the action live. And by thousands, we mean 400,000 of your closest Irish loving friends! Sadly the coloring only lasts for about five hours, so be sure to get there right when it happens! If you’re not sure where to watch the dyeing, the best viewing spots include: 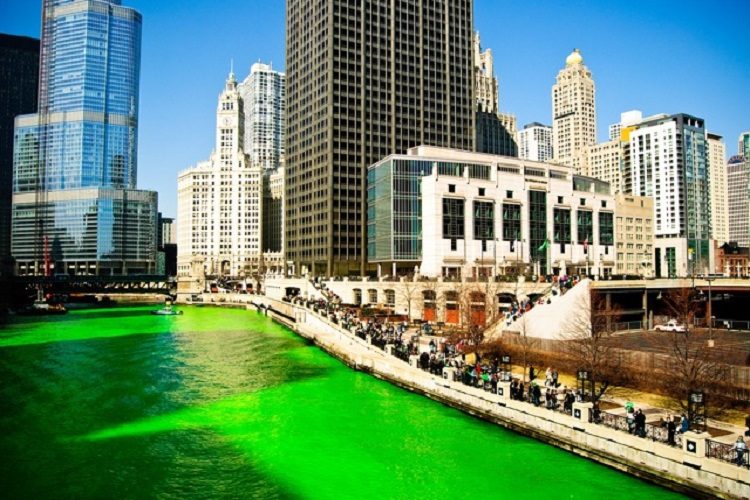 GREEN RIVER TRIVIA — It wouldn’t be St. Patrick’s Day in the Windy City without 400,000 spectators crowding the banks of the Chicago River to “ooh” and “aah” at its (temporarily) emerald green tinge. But what do they use to dye the waterway?

First, a bit of history: The dyeing tradition became an annual thing more than half a century ago, in 1962, but its real origins go back even further. In the early days of his administration as Mayor of Chicago, Richard J. Daley was a man on a mission to develop the city’s riverfront area. There was just one problem: The river itself was a sewage-filled eyesore. In order to get to the bottom of the city’s pollution problem and pinpoint the exact places where waste was being discarded into the waterway (and by whom), Daley authorized the pouring of a special green dye into the river that would allow them to see exactly where dumping was occurring. 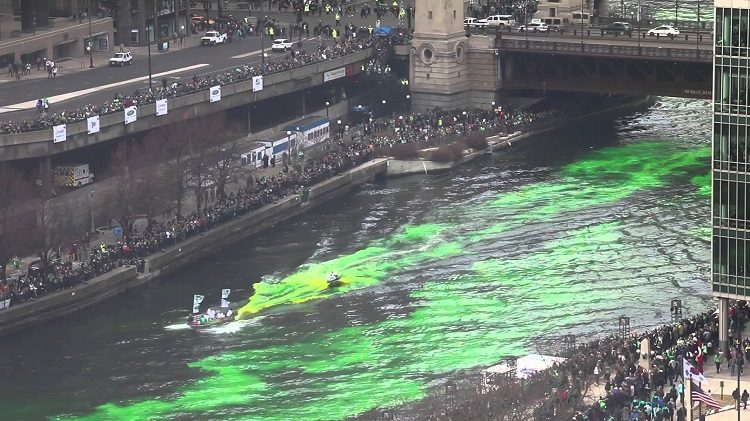 Fast-forward to late 1961 when Stephen Bailey—part of the Chicago Journeymen Plumbers Local, the city’s St. Patrick’s Day Parade chairman, and a childhood friend of Daley’s—witnessed a colleague’s green-soaked coveralls following a day of pouring Daley’s dye into the Chicago River. That gave Bailey an idea: If they could streak the Chicago River green, why not turn it all green?  Three months later, revelers got their first look at an Ecto Cooler-colored river when the city poured 100 pounds of the chemical into the water. They got a really good look, too, as the river remained green for an entire week.    Over the next several years, the same practice was repeated, and again it was carried out by the Plumbers Local. The only difference was that the amount of dye used was cut in half over the next two years until they finally arrived at the magic number: 25 pounds of dye = one day of green water.

There was just one problem: The dye that was intended to help spot pollution was an oil-based fluorescein that many environmentalists warned was actually damaging the river even more. After fierce lobbying, eco-minded heads prevailed and in 1966 the parade organizers began using a powdered, vegetable-based dye.   While the exact formula for the orange powder (yes, it’s orange until it’s mixed with water) is kept top-secret—in 2003 one of the parade organizers told a reporter that revealing the formula would be akin to “telling where the leprechaun hides its gold”—there are plenty of details that the committee lets even non-leprechauns in on:     The dyeing process begins at 9:15 on the morning of the parade (which is always held on a Saturday) when six members of the local Plumbers Union hop aboard two boats, four of them on the larger vessel, the remaining two on a smaller boat.

The larger boat heads out onto the water first, with three members of the crew using flour sifters to spread the dye into the river. The smaller boat follows closely behind in order to help disperse the substance.

Approximately 45 minutes later, voila, the Chicago River is green! But don’t expect it to stay that way. These days, the color only sticks around for about five hours. Which is roughly the same amount of time it takes to get a perfectly poured pint of Guinness if you venture out to an Irish pub on St. Patrick’s Day.