The Shakespeare Project of Chicago wraps up its 22nd Theatrical Reading Season with free reading performances of Shakespeare’s comedy of young love coming of age, LOVE’S LABOUR’S LOST, running May 5-9, 2017, at six Chicago-area venues.   The King of Navarre and his three loyal subjects decide to retire from the world to study and swear an oath to forsake the company of women for three years. Immediately, the Princess of France and her three lovely waiting women arrive on a diplomatic mission. Will the King and his followers remain true to their oaths?

SYNOPSIS:  King Ferdinand of Navarre’s “no fun” edict includes scholarly endeavors, quiet contemplation and complete commitment to chastity for three entire years. His closest courtiers reluctantly sign on. But this is a comedy and it doesn’t take long for everyone to figure out that the whole thing is a bad idea and rules are meant to be broken—especially when the French Princess and her beautiful entourage arrive on the scene. The young men’s studies soon give way to secret letters and amorous vows as the women set out to teach the men a thing or two about love. The puns fly and the playwright’s wordplay take flight in this playful romantic comedy about young love with a surprising conclusion where real-life lessons are suddenly revealed.

Admission is free and seating is limited. All performances are preceded by an introduction to the play that commences 15 minutes prior to curtain. 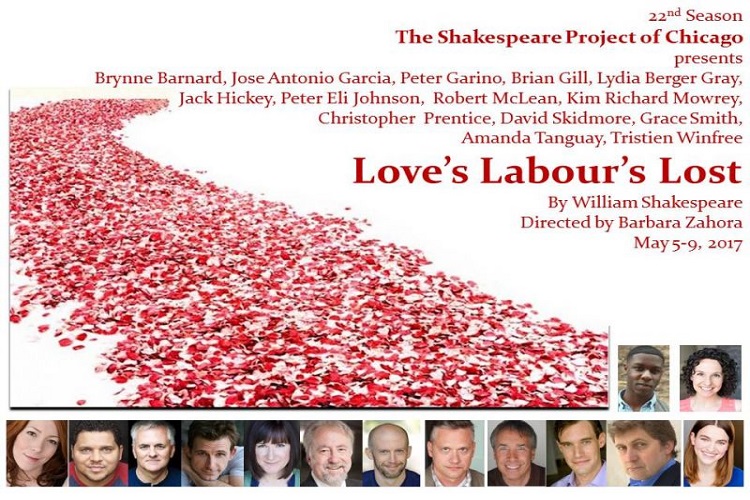 What is a theatrical reading?

What can you expect when you come to one of our theatrical readings?  The first thing you may notice is that the actors are performing book-in-hand. However, as our audiences have told us many times over the past 21 years, the scripts become invisible after the first few minutes as you listen to Shakespeare’s language come alive as it is acted by some of the best professional actors in Chicago.   I often explain to people that have not seen our work before that their experience of the play won’t be less, but more because by placing our focus exclusively on Shakespeare’s text we allow the play to emerge in an unencumbered setting that reveals new insights into the play’s characters and themes.  Many have told us that after seeing a theatrical reading from The Shakespeare Project they truly “get” the play for the first time.

Our performance is completely staged – meaning that actors make entrances and exits and move across the stage as they would in a full production.  You won’t see elaborate sets, props or costumes.  You will hear some music and sound from time to time which is only there to augment your experience and add to your understanding of the play.  We provide a 360 degree experience of the play.  Our dramaturge will introduce the play to you in a brief prologue to give you some background on the play’s history and point out things to watch and listen for during the performance.  After the reading, we hope you stay for our post-show discussion to interact with the actors and creative team and further enrich your experience.