Make plans this weekend to check out the Taste of River North this weekend as it returns for its 16th year. This fun weekend festival will feature drafts from Goose Island and Stella Artois as well as bites from 12 neighborhood restaurants including Big & Little’s, Da Lobsta and Pranzi. Taste of River North takes place at Ward Park at the corner of N. Kingsbury and W. Erie There will be live music, including Weezer, Sixteen Candles, and No Doubt tribute bands, and a kids’ tent sponsored by Lurie Children’s Hospital –which features interactive games and educational fun! The East Bank Club, which is a sponsor of the festival, will also lead free workouts beginning at 10 a.m. Saturday at the gym, 500 N. Kingsbury. $5 suggested donation for admission. Friday-Sunday; Ward Park, 630 N. Kingsbury Street (at Kingsbury and Erie intersection).

The annual Taste of River North, presented by the River North Residents Association and produced by Ravenswood Special Events and Duff Entertainment, will showcase one of Chicago’s most entertaining destination neighborhoods in a variety of flavors for a 16th consecutive year, Friday, July 21 – Sunday, July 23. From the area’s most dynamic restaurants and chefs to local artisans and bands, Taste of River North features many of River North’s leading attractions in one spot, over one long weekend. With the Chicago River glistening on one end and Chicago’s mesmerizing skyline dancing off the other, the festival location – Ward Park – is second to none.

Over 20,000 people are expected to attend the 3-day event where the crowd will enjoy chefs dishing out sizable tasting portions and non-stop live music. In addition to the great cuisine and tunes, Taste of River North 2017 will also feature an array of local artisans and designers who will host pop-up shops throughout the weekend. The event also places heavy emphasis on family-friendly events and is bringing back the popular Lurie’s Kid Activity Area to amuse little ones. All fest-goers are welcome to start their day of tasting with a morning workout hosted by East Bank Club. 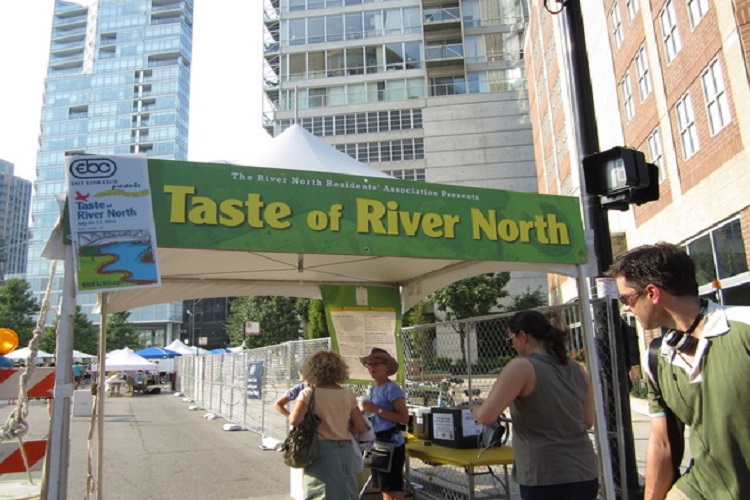