5 days ago
COVID-19 Vaccine Freebies and Deals
7 days ago
FREE INFO: Top Baby Names in 2020
2 weeks ago
Check out these 250+ Birthday Freebies!
2 weeks ago
McDonald’s Offers FREE Caramel Brownie McFlurry
3 weeks ago
The Government will Reimburse you $9,000 for a COVID Funeral
1 month ago
FREE Zoom Backgrounds from the Chicago History Museum
1 month ago
Uno Pizzeria & Grill: Buy One, Get One Free Deep Dish Pizza through April 5, 2021

Come enjoy the free Bucktown Arts Fest in Chicago on August 26-27. Now in its 32nd year, the Bucktown Arts fest has grown to become a neighborhood tradition and one of the city’s – and the country’s – premier arts festivals showcasing close to 200 participating artists, plus a wide range of musicians, dancers, poets & performers and attracting more than 40,000 visitors annually. Admission is free. The 32nd annual celebration of art features paintings, sculpture, ceramics, jewelry, furniture and photography from local and national artists, plus live music (see artists and bands below) , theater, film screenings, dance and spoken word performances on stages throughout the fest, plus a food court and a beer and sangria tent. 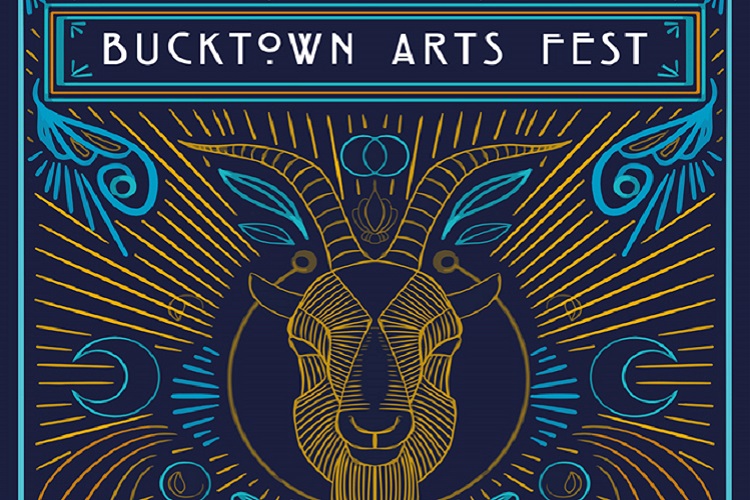 Instead of depending on national touring acts and marquee names to attract teeming crowds, the Bucktown Arts Fest’s music stages are proud to put the spotlight on the remarkable musicians who live in and perform around Bucktown and its surrounding neighborhoods. Our diverse music lineup offers a range of musical styles from blues to bluegrass, jazz to indie rock.

1 p.m. – The Arts of Life Band
The band makes danceable party music with a rock edge.  It is an ongoing collaborative project between disabled and non-disabled artists in the Chicago area, based out of the Arts of Life community of artists.

2 p.m. – Allegra Malone & the Revival
Allegra’s new music is a return to the Muscle Shoals roots of her upbringing — a departure from the simplicity of her solo debut. The new recipe is remnant of old fashioned, iconic groves, southern rock and blues spun with evocative lyrics and gilded atmosphere (brought to you by Chicago and Nashville’s best). The sound is youthful and bright, while remnant of another time — an uplifting experience that will always be relevant.

3 p.m. – Lay Chickie
Lay Chickie is a heady brew that mixes both you and experience, as well as East Coast and Midwest. Tae, Robin, Taylor, and Bill met at a bar known to be a fixture for both musicians and ne’r dowells. They bonded over liquor and love for rock’n’roll. Tae and Taylor, songwriters via Vermont and NYC, were seeking partners in crime. Robin and Bill were seasoned vets looking for new meat. It was a match made in Hades. Lay Chickie was born and the city better watch out.

4 p.m. – Amy Rigby
“Her whimsical, often autobiographical songs are masterful. Funny and enticing, she is up there with the likes of Paul Simon and Randy Newman.” The New York Times

Amy Rigby established herself as a solo artist in 1996 with her acclaimed debut album Diary Of A Mod Housewife, called “a classic” by The Chicago Tribune. It was a critical smash and commercial success, voted #8 album in the 1996 Village Voice Pazz & Jop Critics’ Poll and landed Rigby on NPR’s Fresh Air with Terry Gross, noncommercial and college radio and in every major magazine and newspaper in the US. Over the last two decades, Amy has toured the US, UK and Europe and released four more solo albums as well as three duo records with her husband Wreckless Eric. Diary Of A Mod Housewife has just been released on vinyl for the first time and Amy is touring to revisit the classics and play new songs from her upcoming solo album due out next year.

5:15 p.m. – David Singer and the Sweet Science
David Singer is a musician and filmmaker based in Chicago. His records have found their way onto the Albums of the Year lists of the Chicago Tribune, Chicago Sun-Times, No Depression, Huffington Post, and the prestigious Village Voice“Pazz & Jop” poll. Greg Kot of NPR’s Sound Opinions describes David as “one of the city’s most evolved pop craftsmen of the last decade.” David is also a celebrated composer, having scored projects including August: Osage County (winner of five Tony Awards and the Pulitzer Prize) and the critically acclaimed Broadway revival of John Steinbeck’s Of Mice and Men. He is also a writer/director whose first feature film, Imperfections, was released in July and is now available on all digital platforms.

6:30 p.m. – The Paranoid Style
NPR, Heavy Rotation: “The Paranoid Style may be the bearer of bad news, but at least the band bears it smashingly.”
Rolling Disclosure, the dark, rollicking, blink-and-you’ll-miss-it 29-minute full-length from Elizabeth Nelson’s garage-glam outfit The Paranoid Style, reintroduces the world to the jet black humor, propulsive energy and inescapable hooks which have made Nelson a treasured underground favorite over the past few years. Coming on the heels of 2015’s critically adored Rock & Roll Just Can’t Recall EP, Rolling Disclosure doubles down and ups the stakes on that release’s T-Rex-for-the-end-times vibe. Rolling Disclosure veers from the exhilarating chamber-punk of “The Ambassador’s Morning Lift” and “Lola On A Leash” to the beguiling, Johnny Thunders-like total trash of “Certain Lists” and “Common Emergencies” to the blown out emotional landscapes of “Cathedral Lows” and “Casual Water.” This is The Paranoid Style’s first Chicago appearance.

2 p.m. Dharma
Along the jagged road that leads to Dharma, there was an unrelenting certainty, an intangible draw for more.  Early success with founding members Brian Boyd’s (Lead Vocalist/Guitarist) and Chris Edginton’s (Bass/Guitar) incubation bands, Meatus and Sir Leo, saw musicians come and go, but it is within Dharma that they have found enlightenment. The addition of savant Herb Wilde (Guitar/Bass) and seasoned veteran Paul Ovnik (Drums) added an element to Dharma that is next level. Grounded in solid songwriting with a wide palate of influences (Chicago post-punk, Radiohead, Queens of the Stone Age, Silversun Pickups, Pixies, David Bowie, Tool, Neil Young, Grateful Dead), Dharma presents a unique sound rooted in rock/alternative, while gently pulling from soul, blues, and folk.

4 p.m. – The Menards
Tim Menard is a singer-songwriter and multi-instrumentalist who has been entertaining audiences throughout America for over four decades. A diverse and unique talent, Tim’s musical proficiency, introspective songs, and smokey tenor make him a musician to be reckoned with. He met his wife Cathie, a fiddle player, when they performed together for a St. Patrick’s day celebration in the 90s and they’ve played together ever since. In early 2017 they formed “The Menards” with Gabriel Stutz on pedal steel and Michael Krayniak on bass, backing up Tim’s originals and his vast array of cover tunes.

Cathie Van Wert Menard learned classical violin when she was young, and picked up fiddle when she moved to Chicago in the early 90s. Since then she’s built up her chops playing with bands including Fallen Angels, Trippin Billies, Naomi Ashley, Allegra Malone, Jamie Wagner, Lou Rider, Terry White and The New Dealers. Michael Krayniak moved to Chicago from Northwest Indiana in 1997. A longtime member of Anna Fermin’s Trigger Gospel, he’s also enjoyed playing with Bunkertown, Cannonball, Michael McDermott and the Westies, the Joe Lanasa Band, Ellen Rosner, Naomi Ashley, Ron Lazeretti, The Andon Davis Trio, the Zimmermen, the Yellowhammers and most recently, The Menards. Gabriel Stutz is originally from Michigan and has played pedal steel and guitar with various bands in Chicago, including Sarah and the Tall Boys, Gin Palace Jesters and the Hoyle Brothers.

5:15 p.m. – The James Wagner Band
Jamie Wagner is a singer and songwriter based in Chicago who has been writing, composing and performing his original music around the area for over three decades. Jamie is continually backed by a wide variety of Chicago’s leading musicians and artists. His songs are described as “folk dialogs with a rock n’ roll edge.” In addition, Jamie is owner and head engineer at Chicago’s Strobe Recording Studios where he has produced many of the city’s up and coming artists since 2004. Jamie is also an accomplished pianist and 13 String Contra-Harp Guitar player and is regularly backed by many of Chicago’s leading musicians including multi-instrumentalists Brian Wilkie (pedal steel/lead guitar), Larry Beers (percussion), Justin Loftus (bass), and Mike Przygoda (bass/keyboards).

6:30 p.m. – The Peter Joly Band
Peter Joly is a veteran, Chicago-based singer-songwriter (Big Breakfast, For Pilots) whose unique approach to lyric and melody serves up a fresh, original take on a seemingly familiar genre. A 2017 nominee in the Chicago Reader’s Best Of 2017 poll, Joly also gained national attention for his self-titled 2016 release. No Depression magazine said, “The album’s emotional impact will leave you thinking a bit more carefully about life, observing and enjoying the minutiae around you.”