One of our favorite tours in the Chicago Architecture Biennial is the free tour of the Frank Lloyd Wright–designed Johnson Wax corporate headquarters in Racine, Wisconsin, which they are doing AGAIN. Tours will run from September 16th through January 7th, coinciding with the opening of the Chicago Architecture Biennial. Leaving from the Chicago Cultural Center, the tour includes the Frank Lloyd Wright buildings as well as the Norman Foster–designed Fortaleza Hall. On Saturdays and Sundays the tour also stops at Wingspread, a house designed by Frank Lloyd Wright for Herbert Fisk Johnson Jr., president of S.C. Johnson during the late 1930s.Located about 75 miles north of Chicago, the campus was built between 1936 and 1939. Along with the 14-story Johnson Wax Research Tower, the administration building was designated a National Historic Landmark in 1976.

The Johnson Wax Headquarters were set in an industrial zone and Wright decided to create a sealed environment lit from above, as he had done with the Larkin Administration Building. The building features Wright’s interpretation of the streamlined Art Moderne style popular in the 1930s. In a break with Wright’s earlier Prairie School structures, the building features many curvilinear forms and subsequently required over 200 different curved “Cherokee red” bricks to create the sweeping curves of the interior and exterior. The mortar between the bricks is raked in traditional Wright-style to accentuate the horizontality of the building. The warm, reddish hue of the bricks was used in the polished concrete floor slab as well; the white stone trim and white dendriform columns create a subtle yet striking contrast. All of the furniture, manufactured by Steelcase, was designed for the building by Wright and it mirrored many of the building’s unique design features. 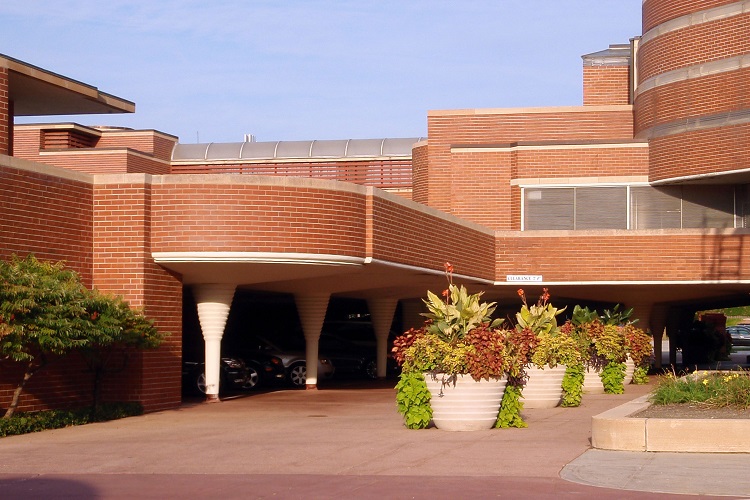 The entrance is within the structure, penetrating the building on one side with a covered carport on the other. The carport is supported by short versions of the steel-reinforced dendriform (tree-like) concrete columns that appear in the Great Workroom. The low carport ceiling creates a compression of space that later expands when entering the main building where the dendriform columns rise over two stories tall. This rise in height as one enters the administration building creates a release of spatial compression making the space seem much larger than it is. Compression and release of space were concepts that Wright used in many of his designs, including the playroom in his Oak Park Home and Studio, the Unity Temple in Oak Park, Illinois, the Solomon R. Guggenheim Museum in New York City, and many others.

Throughout the “Great Workroom,” a series of the thin, white dendriform columns rise to spread out at the top, forming a ceiling, the spaces in between the circles are set with skylights made of Pyrexglass tubing. At the corners, where the walls usually meet the ceiling, the glass tubes continue up, over and connect to the skylights creating a clerestory effect and letting in a pleasant soft light. The Great Workroom is the largest expanse of space in the Johnson Wax Building, and it features no internal walls. It was originally intended for the secretaries of the Johnson Wax company, while a mezzanine holds the administrators. 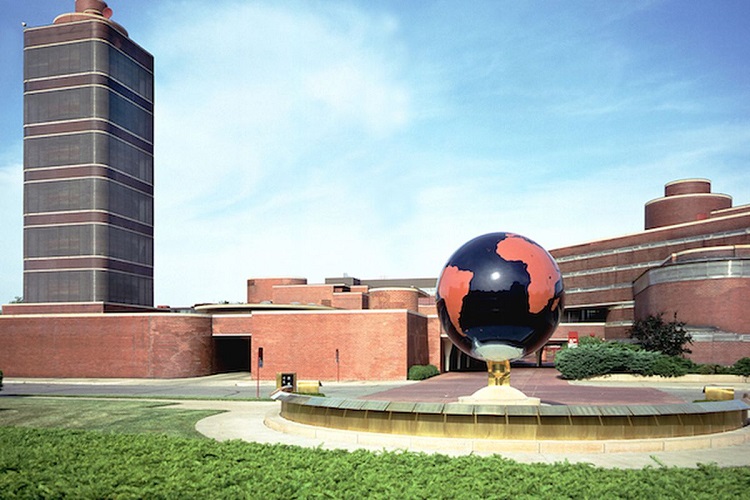 The Johnson Wax campus is often considered one of Wright’s masterworks, in spite of or possibly because of, the controversy surrounding its design and construction. Aside from the notoriously leaky details, which are found in many of Wright’s projects, the buildings were exorbitantly over budget. Scientists in the Research Tower also found the space to be drafty and uncomfortable. Even with these issues, the project was innovative on many levels. The famous dendriform lily pad columns are no less than an engineering feat. At only nine inches wide at the base and 18 feet wide at the top, few believed they would sustain the weight of the roof. When tested, they were able to sustain loads five times that needed. The Research Tower used a structural systemsimilar to Wright’s Price Tower in Texas, complete with cantilevered floor plates and an early curtain wall system.

The tours are free, but seats need to be reserved online.