Attention taco lovers: It’s National Taco Day on Wednesday, October 4th, and local and national restaurants around the country are serving up great deals to celebrate your favorite tortilla-based food.   Just last year, Americans ate more than 4.5 billion tacos—the equivalent to 775 million pounds, according to the National Taco Day website. That’s the weight of two Empire State Buildings. And end-to-end that’s about 490,000 miles of tacos, the same distance to the moon and back.  Regardless of how you prefer your taco—soft or hard shell, minimal or maximum toppings like salsa, corn, or cheese—we have found a few of the places with some major taco-related deals on Wednesday.

For those of you who like to drink, Oct. 4 also is National Vodka Day and Blaze Pizza is celebrating its first-ever Noncon4mist Day with $4 pizzas after 4 p.m.  While there are likely plenty of local deals on National Taco Day, we have focused on deals available nationwide or in multiple places so that many people will be able to enjoy them. 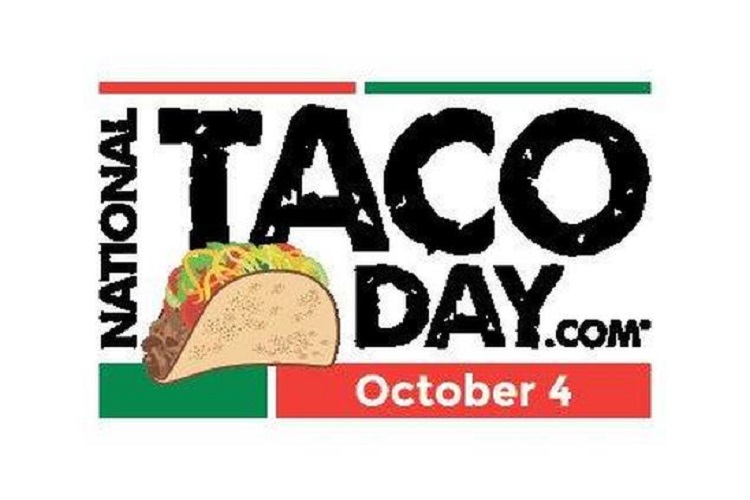 Here are the deals so far:

Taco Joint will be serving up ANY 3 tacos for only $5 between 3-5 p.m.! Considering tacos average about 3 bucks around these parts in Chicago, this is pretty rad deal (and don’t fret if you’ll be busy earlier, all tacos after 10 p.m. are only $2.) For a special bonus post a photo of your tacos with #tacotoday to get free chips, salsa, and guacamole! 158 W Ontario St; 1969 N Halsted St.

Check out Cantina will have half-priced tacos and more goodies in the upstairs lounge from 4-7p.m. to celebrate this momentous day. This is a perfect stop for an after-work Happy Hour- get an ice-cold margarita while you’re at it. 508 N State St.

Nacional will be offering half price mini-tacos from 5 p.m until midnight. Dig into queso with pepper Jack, mozzarella, and roasted poblano; barbecued lamb with organic agave and avocado salsa; grilled beef tenderloin with spicy tomatillo salsa and more goodies. They will also have a DJ spinning all night so get on it. 325 W Huron St.

Mercadito is celebrating their 4th anniversary tonight so it’s kind of the best place to also get your Taco Day nosh on. Their best deal tonight is a $4 gordita with a choice of steak, chicken or al pastor. There will definitely also be anniversary cocktails and deals on tequila shots, with party favors and DJs, which is kind of the only thing you need to know. 108 W Kinzie St.

High Noon is a Mexican inspired saloon which is the perfect environment to get wild. They have an extensive list of delicious tacos on their regular menu, but on this day, you can also order a smoked salmon taco for $4 and a cactus taco for $3. 1560 N Milwaukee Ave.

Tijuana Flats: Get $2 tacos and $2 Mexican drafts Wednesday at participating locations. Many locations of the fast-casual Tex-Mex chain have a Tuesday taco deal called Tijuana Tuesdaze where two tacos, chips and a medium drink are $5.99. Also, all locations have a take-home “Hardly Homemade” taco meal kit for $31.99. Find locations here.

On the Border: Mini tacos are 50 cents each when you dine-in Wednesday at participating locations. The chain also has a 20% off taco catering items through Oct. 8 with promo code Taco17. Learn more here.

Chuy’s: Crispy beef tacos are $1 with any order Wednesday at participating locations and get $1 off Mexican beer. And if you dress up like a taco, you earn a free meal.

Del Taco: New and existing members of Del Taco’s Raving Fan eClub will get a buy one Queso Crunch Taco, get one free coupon to use Wednesday at participating locations. Also for signing up for the rewards program at www.deltaco.com/ravingfan, get a coupon for two free grilled chicken tacos.

Blaze Pizza: Not an official National Taco Day deal, but Blaze Fast-Fire’d Pizza has a pop-up pizza party after 4 p.m. Wednesday for its first annual Noncon4mist Day with $4 pizzas at more than 200 locations. Along with $4 dine-in and customizable pizzas Wednesday, customers will get a bounce-back coupon to receive $4 off a pizza and drink during a future visit, redeemable through the Blaze Pizza mobile app. Find locations here.

California Tortilla: Buy one taco, get one free Wednesday. The Blackened Fish, California Sunset, Korean BBQ and Crunchy BBQ Ranch street tacos are included in this deal and there’s a limit of five free tacos per person. Sign up for the Burrito Elito rewards program here.

El Fenix: Get $4.99 taco plates with two crispy or soft tacos at participating locations of the Texas-based chain with a coupon posted on its website. Print the coupon or show the digital coupon on your smartphone. One coupon is valid for up to 10 people in your party.

Fuzzy’s Taco Shop: Get $1 tacos all day Wednesday including most of Fuzzy’s Baja Tacos, including their breakfast tacos. Some exclusions apply.

Jimboys Tacos: Get one free taco for every taco purchased, up to three free tacos per guest Wednesday at participating locations. Offer applies to the Original Ground Beef Taco and Bean Taco only. The chain has 38 California and Nevada locations.

Hot Head Burritos: Buy two tacos, get one free Wednesday at all locations. Get the deal by walking into any location or if ordering online enter the code buy2tacos.

Margaritas Mexican Restaurant: Order the two pound, 12-inch Taco Gigante for $12.99 Wednesday and receive a voucher for a free Taco Gigante to use on your next visit. In October, the chain with locations in Connecticut, Maine, Massachusetts, New Hampshire, New Jersey and Pennsylvania has a Taco Gigante Challenge and if you finish the entire taco you get a place on Margaritas Wall of Fame and bragging rights. Learn more here.

Rubio’s Coastal Grill: The San Diego-based company with 200 locations throughout California, Arizona, Colorado, Utah, Nevada and Florida is celebrating National Taco Day a day early. On Tuesday, participating locations will have The Original Fish Taco for $1.75, The Fish Taco Especial for $2 and The Original Fish Taco with Mango Salsa for $2.25. The specials are dine-in only. Learn more here. Also join Rubio’s Beach Clubfor a free taco and other perks here.

Taco Bueno: Get a free taco with any purchase Wednesday.

Taco Cabana: From 5 to 8 p.m. Wednesday, get 50 percent off a chicken fajita taco at participating locations. Dine-in only and one per person. Learn more here.