FAMILY FUN THIS SUNDAY: Barrel of Monkeys, a group known for transforming children’s stories into sketch comedy puts on a new show — That’s Weird, Grandma — at the Neo-Futurarium (5153 N. Ashland). 2 PM on Sunday Oct 15th, $15; $10 students, seniors, and veterans; $5 children 12 and under.   The stories featured in THAT’S WEIRD, GRANDMA are written by Chicago Public School students and adapted for the stage and performed by Barrel of Monkeys Company Members. Clever and funny – touching and poignant – the collection of short sketches and songs is equally entertaining for adults and children.

Barrel of Monkeys, a Chicago-based arts education theater ensemble now in its 20th season, conducts creative writing workshops with 3rd through 5th grade students in underserved Chicago Public Schools. The ensemble of actor-educators then turns their stories and words into professionally performed theater, presented both in-school and for the general public through its revues. Barrel of Monkeys annually performs more than 300 student-written stories for the students in their schools and 175 stories on the stage for the general public. 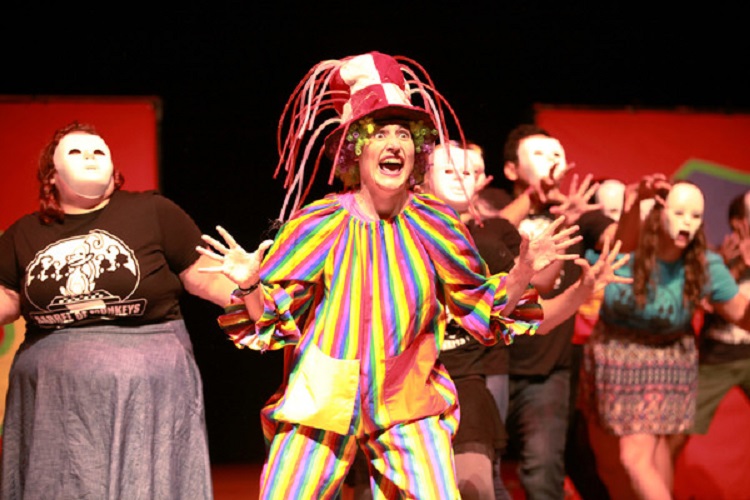 Since Barrel of Monkeys’ inception in 1997, its teaching artists have served more than 60 Chicago Public Schools. Over 15,000 elementary school students have participated in the Barrel of Monkeys programs, which aim to build students’ writing skills, improve self-esteem, and instill confidence in their ideas and abilities.   Barrel of Monkeys is sponsored in part by Wintrust Financial, Allscripts, Inc., IMC Chicago, Ernst and Young, and Punchkick Interactive.