Why not come out and enjoy some music from some great new artists at the Haymarket Pub & Brewery’s weekly Thursday night Americana Concert Series. It brings some of the best up-and-coming and established artists to the stage (two artists each week) with no cover charge. While you’re there, sip on a craft beer and nosh on made-from-scratch dishes. Upcoming artists include Brandon Whyde and Eric Quigley Thursday, Oct. 19; Edan Archer and Josefina Oct. 26; and Brian Wright and Nikki Morgan Nov. 2. 7:30 and 9 p.m. Thursdays at Haymarket’s Drinking & Writing Theater, 737 W. Randolph St., Chicago. haymarketbrewing.com/ or facebook.com/HaymarketBrewing/. 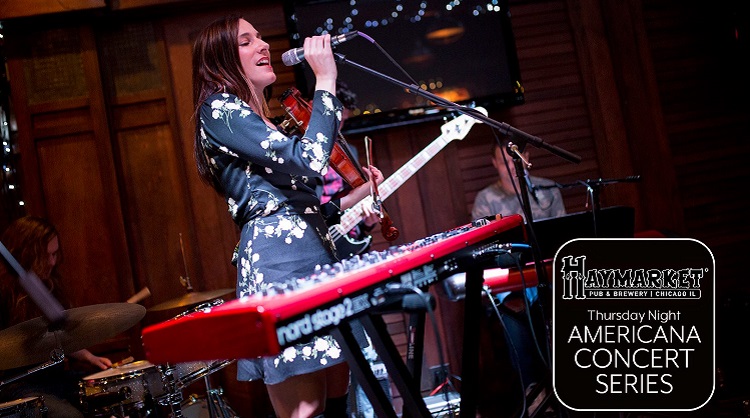 On his new album, Silver Apples of the Moon, Brandon Whyde gives listeners a glimpse into his past — a past that includes heartbreak, loss and self-discovery. His voice has been described as soulful, whiskey-soaked and even “a freight train on fire” – qualities that shine through on his latest release.

Silver Apples of the Moon was recorded with Grammy-winning producer Jimmy Nutt in Muscle Shoals, Ala. – an area known as “The Shoals” – the album includes some of the veteran musicians who helped The Shoals earn acclaim as a hotbed of musical talent. Spooner Oldham, who played keyboards on Percy Sledge’s “When a Man Loves a Woman” and as part of several of Neil Young’s projects and Bob Wray, who’s played bass on more than 30 #1 country hits, are just a few of the artists appearing on Silver Apples of the Moon. The SteelDrivers frontman, Gary Nichols, makes a special guest appearance on the song “Self-Medicated”.

The album — Whyde’s third full-length release — includes rollicking melodies and mournful ballads, showcasing his vocal range. On autobiographical tracks like “Self-Medicated” and “Ain’t I A Man,” his lyrics focus on some of the more challenging moments of his life, including his father’s death, a friend’s struggle with addiction and the uncertainty of his early career.

Whyde, now 31, was just 19 when he left college, and a full-ride scholarship, to pursue a career as a singer-songwriter. He moved from Indianapolis to a place where he could immerse himself in musical culture: Nashville, Tenn.

In 2009, he launched his first U.S. tour, and landed a residency at Rockwood Music Hall in New York City. In his nearly eight years touring as a solo artist, he has opened for Dwight Yoakam, Sturgill Simpson, Lady Antebellum, and Nathaniel Rateliff, among many others. He also sang at Emmy Award-winning actress Katherine Heigl’s wedding.

Whyde is currently on tour in support of Silver Apples of the Moon, set to release on Sept. 19, 2017. When he’s not touring, he focuses on songwriting and has co-written songs with Grammy-winning country songwriter Clint Lagerberg and modern Americana music stars Jamie Kenney, Tony Lucca and Stone Aielli.

Drawing from traditional folk/blues stylings, with rock roots, Eric Quigley’s sound is both modern and classic in its construction. A Chicago native singer/songwriter; Eric aspires to continue creating and performing.

Eric is also the singer/songwriter & frontman for Chicago rock band One More Moon, melding a variety of influences into a heavier, folk/rock sound.

American songwriter Tim Easton was born in upstate New York, right across the river from Canada, his Mother’s home country. He grew up in Akron, Ohio and spent three years living in Tokyo because of his father’s job at Goodyear Tire.
​
Traveling early and often, he learned the ways of the road and rails and spent 7 years as a bonafide troubadour, making his way around Europe, playing the streets and clubs-living in Paris, London, Prague, Dublin, or wherever he laid his hat.
It was this period of time when he developed his songwriting style-folk based storytelling and personal traveling tales, often peppered with bold confessions or “tell it as is” reality. Rolling Stone Magazine praised him as “having a novelist’s sense of humanity.”

Returning to his roots in North America, New West Records released five solo albums starting with 2001’s “The Truth About Us,” which featured Jay Bennet, Ken Coomer, and John Stirrat (of WILCO) as the backing band.
​
Invitations from mentors Lucinda Williams, John Hiatt, and Steve Earle as a support act followed.
​
Many tours later, after settling in Nashville, Easton recorded an album for THIRTY TIGERS (Not Cool, 2013), which accented the stripped down Memphis & Sun Studios sound of the Tennessee Three. His ninth solo album, American Fork, is a grand departure from his previous efforts, featuring a fully fleshed-out backing band, musicians and elaborate song arrangements. It was released September 2nd on LAST CHANCE RECORDS (North America) and AT THE HELM RECORDS (UK) in September, 2016 and reached to #11 on the Americana Music Association’s Radio Charts in Billboard Magazine.
​
Recently, Easton reached the milestone of having 100 published original songs which he celebrated by releasing a hundred solo performance videos on a hundred consecutive days, mostly from his home in Nashville, Tennessee, on his personal YouTube channel, and publishing a book of 100 lyrics. 2016 has brought him on tour to all of North America, Australia, and Europe.

The Katie & Les Bates Band is a sister-brother duo band out of Chicago. KBLB is currently writing & recording their first EP, and traveling the greater Chicagoland area, playing anything from blues to rock to soul to funk to country to R&B.

The band found their roots in 2012 when Les, a recent college grad at the time, became immersed in the Chicago blues scene after playing the guitar for years. His discovery of the blues gave flight to his guitar vocation.

Katie had sung in school and church choirs for most of her life, but strengthened her vocals while at college in the University of Illinois Black Chorus. In November 2015, Katie and Les joined to form their own, self-titled band, and the two have been developing their sound ever since.

KBLB has performed sets across Chicago proper & suburbs (Schuba’s Tavern, Buddy Guy’s Legends, The House of Blues, The Dawson, Skeleton Key Brewery) and Indiana (Running Vines Winery, Aftermath Cidery), in addition to private events. The two operate as an acoustic duet, as well as a band with various bass guitar players, drummers and other instrumentalists.