We are all excited about the range of Christmas shows available this year in Chicago, from the old classics to some new ones.    Let’s face it, Chicago is a theater town. As this year comes to a close and a New Year soon unfolds, Chicago’s theaters are just warming up their marquees. Set to the backdrop of the holiday season, some of Chicago’s major theaters are drawing audiences this month to experience annual holiday traditions, big productions and one-of-a-kind collaborations.    Whether you’re a theater aficionado or not, this month offers a chance to whet your palette with fun and beloved productions. And if you’re looking for gift ideas this season, well … hint, hint – give someone the gift of a theater performance! With the holidays near, here is a list of a few shows that may get you in the holiday spirit.  Check out this list of shows and go see one for yourself!  We will keep adding to the list as we find more

Now a beloved Chicago tradition celebrating its 40th anniversary, The Goodman Theatre ushers in the holiday season with its adaptation of Charles Dickens’ classic holiday story A Christmas Carol. Audiences look forward to the “bah humbugs,” the electrifying arrival of the ghosts, the jubilant musical numbers and dancing, and Scrooge’s joyful rediscovery of life, love and the Christmas spirit. Goodman’s Carol continues to lift heats and spirits after four decades more than a million visitors, and the timeless holiday tale promises to be merrier and more magical than ever. The Daily Herald says the play is “the crown jewel of the holiday season” — find out for yourself or relive the magic again.

A ballet in two acts, The Nutcracker opens in Chicago on Christmas Eve, 1892, mere months before the opening of the World’s Columbian Exposition of 1893, also known as the World’s Fair, a marvel unlike anything the city has ever seen. Marie and her younger brother Franz arrive at home, where their immigrant mother-a sculptress of modest means-designs the seminal masterpiece that will preside over the Fair. A festive Christmas potluck ensues, only to be interrupted by the mysterious Great Impresario, creator of the World’s Fair. He entertains with enchanting visions of the what’s to come, distributing gifts in the process, which includes a mercurial nutcracker for Marie. That evening, Marie awakens to an epic battle between toy soldiers and rats led by The Rat King and the now life-size Nutcracker. Unexpectedly, Marie saves the day, as The Great Impresario and the Nutcracker, now transformed into a Prince, set sail on a magical journey into the night.

performs at the Cadillac Palace Theatre (151 W. Randolph).  The uplifting story and beloved songs of Bing Crosby’ movie White Christmas have been enjoyed by families for generations. Now, you can continue the timeless tradition with your family at this glorious and exciting live production! White Christmas tells the story of two showbiz buddies putting on a show in a picturesque Vermont inn, and finding their perfect mates in the bargain.  (November 21 – December 3). 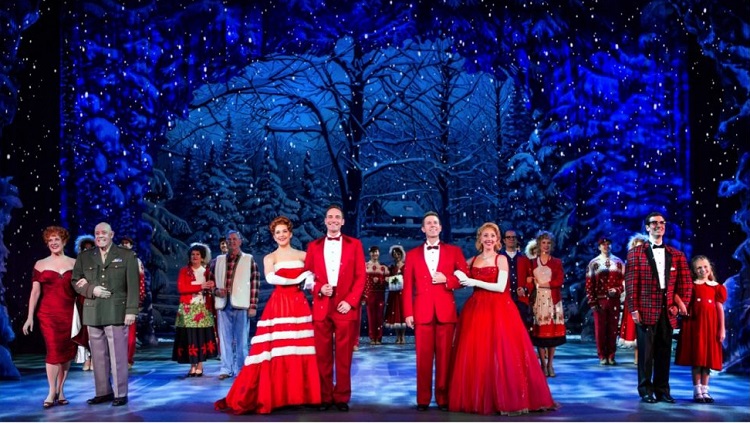 Formed of the three most established ballet schools in Russia, The Russian Grand Ballet comprises the country’s biggest rising ballet stars. Now touring the world, they are performing the most famous festive ballet of all; The Nutcracker. This enchanting work, choreographed by Marius Petipa and composed by Tchaikovsky, is an out of this world tale of friendship set against the backdrop of the wonderful world of the Sugar Plum Fairy.        WHAT IS THE NUTCRACKER ABOUT?   One snowy Christmas Eve, at a great townhouse where a party is in full swing, local magician Herr Drosselmeyer arrives with gifts for the children, including a wooden nutcracker for Marsha, the oldest child. When the clock strikes twelve an adventure begins and the Nutcracker comes to life, leading our heroine Marsha into a war between mice and tin soldiers, and into the enchanted Land of Sweets where a festival awaits them.

“Too Hot to Handel: The Jazz-Gospel Messiah”  at Auditorium Theatre, Chicago

A hip-hop holiday treat set to a bangin’ beat! CST and Chicago hip-hop sensation the Q Brothers-creators of Othello: The Remix and Funk It Up About Nothin’-have toured around the world, playing to sold-out houses in Edinburgh, Germany, South Korea, Australia and London. Now the team turns up the volume on Charles Dickens’ classic tale, mixing everything from reggae, dancehall and dubstep to epic rock ballads. The Ghosts of Hip-hop Past, Present and Future lead Scrooge on a journey filled with rhythm, rhyme and redemption.

‘TWAS THE NIGHT BEFORE CHRISTMAS is a fantastic, slapstick holiday affair for all ages. The date was December 24, aka the night before Christmas, and per the usual, not a creature was stirring . . . not even the teeny-tiniest mouse.    But not all is good up north because Santa’s Naughty or Nice List has seemingly evaporated into the chilly thin air. It’s up to a pair of dancing mice, a spunky girl and an Elf-B-I (see what they did there?) agent to save the Christmas Day before Santa boards his sleigh. Kick off your family’s yuletide season with this comic take on the classic poem.

The Annoyance Christmas Pageant takes two well loved, holiday children specials and combines them into two acts. Charley Brown Christmas follows Charley Brown on his journey to find the true meaning of Christmas, while enduring the commercialization of the season, and insults from Lucy Van Pelt. In Rudolph The Red Nosed Reindeer, Sam the Snowman tells the tale of how young reindeer Rudolph runs away from home to be independent, with his new found friend Hermie. Together they meet Yukon Cornelius, a prospector searching for silver and gold, discover an island of misfit toys and learn that it’s okay to be different from the pack. All while avoiding the Abominable Snow Monster of the North!

There’s caroling and then there’s rockin’ out. Taking a different approach to the holiday season, Broadway in Chicago premieres Dee Snider’s Rock & Roll Christmas Tale, a new musical that follows heavy metal bar rock band Däisy Cütter. Hungry for fame, the group goes on a quest to revive their rock-and-roll sounds from the ‘80s, to the extent that the four band members are willing to sell their souls to the devil. One problem — they can’t seem to seal the deal because their guitar-ripping tunes keep turning into festive holiday carols. Created by and starring Dee Snider, lead singer of Twisted Sister, this fun holiday musical will have you rocking out in full Christmas spirit through January 4, 2015.

Shows in the Suburbs

Based on the hilarious 2003 Will Ferrell movie, Elf is one of those rare holiday shows that will have both kids and adults laughing, humming tunes like “A Christmas Song” and “Sparklejollytwinklejingley” for days and rediscovering what it means to be a family.

Other shows worth checking out: