CHIditarod is Chicago’s original 100% volunteer-driven epic urban shopping cart race, charity food drive, costumed beauty pageant, talent show, fundraiser and chaos generator. It’s probably the world’s largest mobile food drive, benefiting the Greater Chicago Food Depository and the CHIditarod Foundation‘s quest to end hunger.  So grab some friends, come on out and cheer on costumed runners who will be pushing and pulling decked-out shopping carts through Wicker Park and Ukrainian Village at CHIditarod XIII. Registration is closed, but you can keep tabs on the teams at a series of checkpoints.

Inspired by the Alaskan Iditarod, each team consists of four pullers and one musher. The race also serves as a food drive, with each team required to donate 69 pounds of non-perishable food on race day.

Where is the BEST place to watch?

A great place to watch the race is near the starting line. The race will begin at the corner of Wollcot and Hubbard (map) at 12:30 pm. Feel free to come on by to congratulate all the participants on their lack of taste as they cross the starting line. Cheer on your favorite dawgs (please leave your real pets at home) and mushers as they make their way towards the first checkpoint. Be there by 12 noon or you’ll miss the starting horn. And in case you were wondering – YES, the starting line is EPIC.

We announce the checkpoints early so your friends can gather at their favorite checkpoint to cheer you on. Teams will not know which bars they are going to or their route order till the morning of the race. Teams go to 5 bars and the finish line. Don’t forget to ask them to bring food for the food drive!

The Chicago Urban Shopping Cart Race, affectionately known as the CHIditarod, is an annual race through the Wicker Park and Ukrainian Village Chicago neighborhoods. The date of the event was chosen to coincide with the kickoff of the Alaskan Iditarod ® (whom we are not affiliated with in any way). There are some basic similarities between the races, but there is plenty more whimsy involved in this urban setting. Instead of sleds, we use shopping carts. Instead of dogs, we have teams of five humans: four pullers and one musher, all in costumes they have designed for themselves and their cart. Also, each team is required to start with their cart full of food for donation. The event draws together 1,100+ people, both participants and spectators, and has collected over 156,000 pounds of food and more than $190,000 in direct donations since its 2006 inception. CHIditarod is a one-of-a-kind event dedicated to self-expression — part charity food drive, part beauty pageant, part bar crawl, all costumed shopping cart race. An epic spectacle like no other. 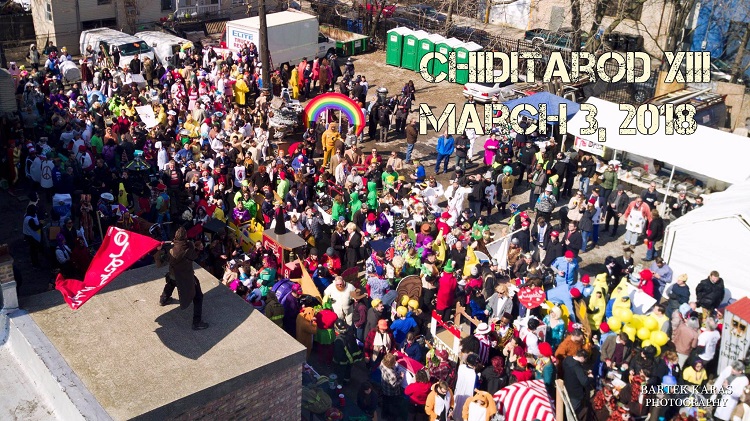 Sounds fun…how does it work and what do I gotta do?

First, realize that the CHIditarod is a race like no other. It’s a food drive, a race for charity, a beauty pageant, a bar crawl, spontaneous street theater, and not for the faint of heart. It’s fast, furious, cold, exciting, fun, and very creative. Teams come back year after year with new theme ideas, bigger and more elaborate carts, and a thirst to express their creativity while helping others through charity. If you’re racing CHIditarod for the first time, make sure you do your homework so you understand what’s expected of your team, and what the event will be like. Realize there are hundreds of costumed Chicagoans ready for an epic day. Realize your team may get sabotaged. Realize that there is no such thing as bad weather — just poor wardrobe choices. You may be asked sternly to get on the sidewalk. These things are okay — at the end of the day, CHIditarodders take care of each other, have a blast, and run roughshod over hunger.