Need a discount code for Divvy Bikes in Chicago? Look no further.  Divvy bike share is a great way to get to/from 580+ other locations across Chicagoland. Apply the discount code found below at any Divvy station kiosk or via the Transit app on iPhone or Android devices. Note that trips longer than 30 minutes incur usage fees. Visit DivvyBikes.com for pricing, station locations, and suggested itineraries.  Use code ADLERIDE to get $2 off a 24-Hour Pass at a kiosk or through Transit App,  which gives you access to thousands of bikes for a 24-hour period. 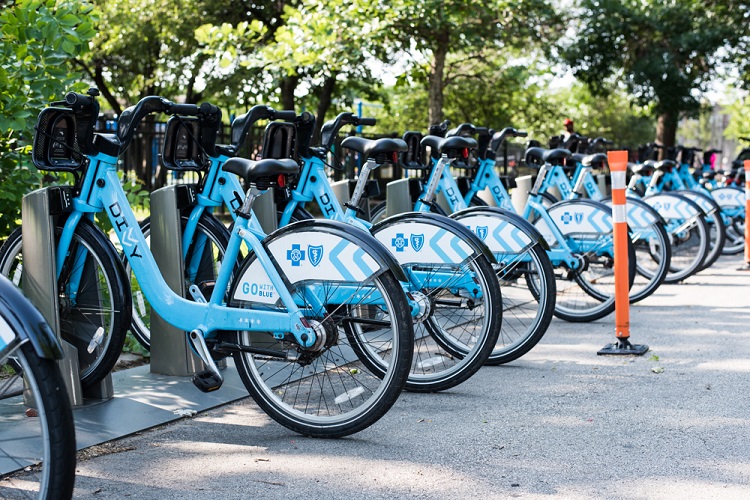 Divvy is Chicagoland’s bike share system, with 6,000 bikes available at 570+ stations across Chicago and Evanston. Divvy provides residents and visitors with a convenient, fun and affordable transportation option for getting around and exploring Chicago.

Divvy, like other bike share systems, consists of a fleet of specially designed, sturdy and durable bikes that are locked into a network of docking stations throughout the region. The bikes can be unlocked from one station and returned to any other station in the system. People use bike share to explore Chicago, commute to work or school, run errands, get to appointments or social engagements, and more.

Divvy is available for use 24 hours/day, 7 days/week, 365 days/year, and riders have access to all bikes and stations across the system.

Divvy is a program of the Chicago Department of Transportation (CDOT), which owns the city’s bikes, stations and vehicles. Initial funding for the program came from federal grants for projects that promote economic recovery, reduce traffic congestion and improve air quality, as well as additional funds from the City’s Tax Increment Financing program. In 2016, Divvy expanded to the neighboring suburb of Evanston with a grant from the State of Illinois.

CDOT’s mission is to keep the city’s surface transportation networks and public ways safe for users, environmentally sustainable and in a state of good repair and attractive, so that its diverse residents, businesses and guests can all enjoy a variety of quality transportation options, regardless of ability or destination.

CDOT’s vision is to ensure that Chicago continues to be a vibrant international city, successfully competing in the global economy with a transportation system that provides high-quality service to residents, businesses, and visitors – a system that offers a solid foundation for the city, regional and national economies, yet is sensitive to its communities and environment.

Divvy is operated by Motivate, the global leader in bike share. A full-service bike share operator and technology innovator, Motivate works to re-envision how people experience and move around cities.

Motivate is adding thousands of bikes to its current systems as Ford GoBike grows bike share tenfold in the San Francisco Bay Area, which launched summer 2017.

With more than 8 million members, Blue Cross and Blue Shield of Illinois, is a division of Health Care Service Corporation, a Mutual Legal Reserve Company, and is the largest and oldest health insurance company in Illinois. Begun in 1936 in Chicago, BCBSIL remains member-owned rather than publicly traded, and is committed to promoting the health and wellness of its members and its communities, fostering greater access to care, and working to lower the overall cost of care while improving the health care quality and patient outcomes.

Public Bike System Company (PBSC) created the first large-scale, solar-power bike share system in the world, launching in Montreal with a 3,000-bike system in 2008. PBSC’s systems are portable, wirelessly integrated and sturdy enough to handle the demands of Chicago’s urban environment. PBSC is Motivate’s supplier in bringing best-in-class technology and equipment to bike share systems that it operates around the world, including Boston, MA, Washington, D.C, and Toronto, Canada. More than 14,600 PBSC bikes are used every day, across the globe.