Welcome to summer! Top local tribute bands… food… libations… artisans… and a second stage with zany entertainment booked by popular neighborhood venues are on tap for the 34th annual Belmont-Sheffield Music Fest.   The annual Belmont-Sheffield Music fest will be held on the Memorial Day weekend — Saturday, May 26 and Sunday, May 27 — along Sheffield from Belmont to Roscoe Street. The iconic street festival will feature tribute bands, DJs, karaoke shows and local artists selling their creations. The event also offers plenty of local food, beer and wine specials.    There is a $5 suggested donation benefiting the Lakeview East Community Partnership, which funds community projects, art installations, neighborhood beautification and other local projects.

One of the first of many Windy City outdoor festivals, this iconic street party in the Lakeview neighborhood takes place just steps from the Belmont El stop.    Music highlights of this Memorial Day weekend happening include main stage performances by several of the region’s favorite tribute bands. Then there are deejays, karaoke shows and the fun acts that entertain visitors on a second stage.   Beyond music, there’s plenty of food, beer, wine and the handiwork of city and regional artists.

The intersection of Belmont and Sheffield has long been the epicenter for all that’s “happening” in Chicago’s trendy Lakeview neighborhood. Some of the Windy City’s most popular nearby nightclubs and bars including Sheffield’s, Berlin, Spin, Trader Todd’s and Leona’s set the tone and ambience that give this area its reputation for nightlife, food and music.    The 34th annual Belmont-Sheffield Music Festival boasts some of the best local musical entertainment in the Midwest, and this festival attracts young professionals from both Chicago and its suburbs. The festival not only features musical acts but also arts, crafts, fashion and a variety of food and drink. 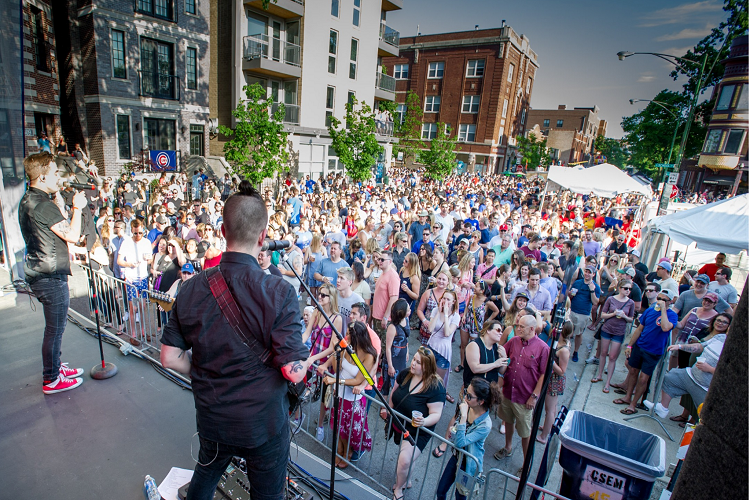