Hulu is one of the best premium streaming video services there is, and during the Black Friday holiday shopping weekend, the price to sign up for Hulu may never be cheaper. From now through Cyber Monday, November 26, CLICK HERE to get 12 months of Hulu for just 99 cents per month.

No, that’s not a typo. You can get a full year of Hulu for less than you would normally pay for the service in two months. Once more, this offer is not just for new subscribers. If you have signed up for Hulu in the past, but have not used it in 12 months or more, you can take advantage of this 99 cents per month deal as well. Keep in mind that this offer is for the Hulu “Limited Commercials” plan and also includes ads in TV episodes and films. After 12 months, people who get this offer will go back to the normal $7.99 a month price plan, although you can cancel the subscription before that date arrives. 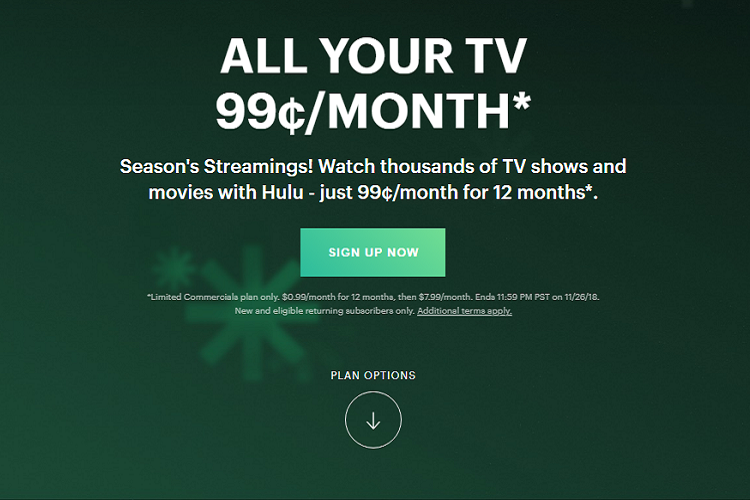 Hulu allows you to access thousands of TV shows and movies. While their range of movies is not quite as extensive as you might find on Netflix, Hulu does offer access to tons of classic and current TV shows. Indeed, many shows post their latest episodes on Hulu the day after they are shown on their network. In addition, Hulu is expanding its original TV shows with hits like the Emmy-award winning drama The Handmaid’s Tale, along with recent hits like Marvel’s Runaways, Castle Rock, and The First. More exclusive new shows and movies are coming to Hulu in the next 12 months, including a revival of the cult series Veronica Mars.