Oh Yes! What a week to be a Chicagoan!   Garrett Popcorn is celebrating its 70th birthday this week by offering 70-cent bags of the beloved Garrett Mix (cheese and caramel popcorn) through Friday.  Garrett Mix is a sweet and savory combination of CaramelCrisp and CheeseCorn that Windy City fans created decades ago.  Monday, September 9 to Friday, September 13 11am-1pm, customers can purchase a special anniversary bag of Garrett Mix for 70 cents, in Shops only.

While the 70-cent offer is valid all week, if you’re really looking to save, wait until Sept. 18. On Wednesday, September 18, Garrett is hosting a Party on the Plaza at Pioneer Court (401 N. Michigan Ave), open to the public from 11am-2pm and giving away FREE bags of Garrett Mix!

Although the Garrett Mix remains the company’s best seller, CaramelCrisp (which you can have with almonds, cashews, pecans or macadamia nuts) and CheeseCorn are also available on their own, as are Garrett’s signature Buttery, Plain and a few seasonal and limited time only flavors. 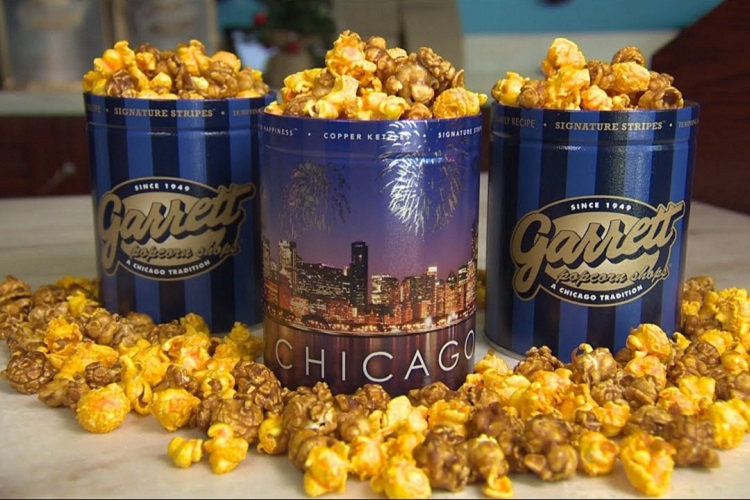 The iconic brand has been making gourmet popcorn since 1949 when they opened their first store at 10 West Madison Street. Now, dozens of shops, cities and countries later, they are still considered a Chicago tradition.

Why? What is about Garrett that makes Chicagoans so possessive?

“It started here and will always be considered a local business to us,” said Chicago native, Hope Bertram. “We support them by sending their Garrett Mix to our clients as holiday gifts every year.”

According to Melissa Lawler, a Chicago expat, “It’s simply the best popcorn in the world. The Garrett Mix is the most addictive thing I’ve ever put in my mouth.”

Garrett makes its popcorn – from secret family recipes handed down over three generations – in the same old-fashioned copper kettles they’ve been using since the beginning. They start with a proprietary hybrid of butterfly and mushroom kernels which are grown just for them. Because the butterfly kernels have “wings” on them, there’s more room for extra cheese and caramel to stick.

When we subtly asked about the rest of the ingredients, Khandelwal smiled and said, “We don’t give away our recipe, but here’s a hint: Our CaramelCrisp includes seven ingredients. One of them is water and the others are all easy to pronounce and are probably in your pantry or fridge. You couldn’t replicate it anyway because we use such high-quality ingredients and have a very methodical process. Our stores are similar to bakeries in that respect.”

And that’s why there’s almost always a line at Garrett shops.

“The experience of coming here and being able to pick their favorite combinations is a joyful tradition for so many Chicagoans,” said Khandelwal. “For visitors, Garrett is a destination in itself.”