The new coronavirus is rapidly spreading around the world, reaching every continent except Antarctica. As of March 7, there have been more than 102,000 illnesses reported in China, and more than 19.000 illnesses reported outside of mainland China in 64 countries, according to the World Health Organization. Large outbreaks have been reported in South Korea, Italy and Iran, and there are a growing number of cases in Europe and the United States.

Here’s what to do if you have or suspect you have COVID-19, the disease caused by the new coronavirus.

What is a novel coronavirus?

The new virus, known as COVID-19, causes a fever, coughing and shortness of breath, which also are symptoms of the flu. Current symptoms reported for patients with COVID-19 have included mild to severe respiratory illness with fever1, cough, and difficulty breathing. Read about COVID-19 Symptoms.  For most people, COVID-19 won’t make them feel much worse than a bad cold would.

While that’s good news for people who develop a mild case, it raises the odds that they could inadvertently spread the disease to a person who develops serious complications. That may be what happened in Washington state, where the virus appears to have quietly spread for weeks before reaching a particularly vulnerable population — residents in a nursing home near Seattle,. As of Thursday morning, 10 patients in Washington and one in California had died of complications from COVID-19.

That makes it vitally important to stay home if you’re not feeling well. Other respiratory illnesses like the flu also are dangerous to vulnerable people, so keeping to yourself is a good idea even if your symptoms aren’t caused by the new virus, he said.   “We should be vigilant for all viruses, not just this virus,” he said. 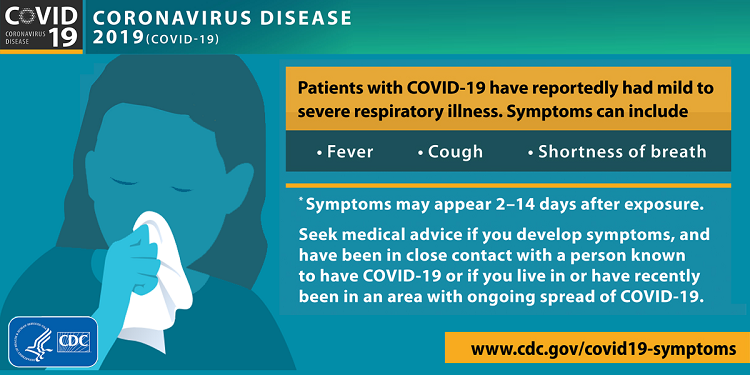 How is it spread?

Early on, many of the patients in the outbreak of coronavirus had some link to a large seafood and live animal market, suggesting animal-to-person spread, the CDC says. The virus can be spread person-to-person, according to the CDC. Officials believe the disease is spread through respiratory droplets produced through coughs and sneezes.

How can I stop the spread?

Wash your hands. Washing with soap and water for at least 20 seconds can help limit the spread of viruses. Make sure not to touch your nose and eyes, covering your mouth when you cough and sneeze, and don’t go to work if you feel ill.

Says the CDC: “While the immediate risk of this new virus to the American public is believed to be low at this time, everyone can do their part to help us respond to this emerging public health threat… It’s currently flu and respiratory disease season and CDC recommends getting vaccinated, taking everyday preventive actions to stop the spread of germs, and taking flu antivirals if prescribed.”

If someone gets sick, at what point should I suspect COVID-19?

COVID-19 arrived during peak cold and flu season, and many of the symptoms are the same: fever, cough and sneezing. So based on symptoms alone, it is hard to tell. But this new coronavirus has been known to severely impact the lungs. “When we hear someone has shortness of breath, we will have more concern and they will need to be seen,” said Dr. Jeff Dichter, a critical care physician.

Doctors say that dehydration from vomiting or diarrhea, a severe headache and progressively worsening symptoms also are warning signs. If you have a chronic medical condition that makes you more susceptible to complications from any type of viral infection, such as pneumonia, it is important to seek medical care. One suggestion is to call your clinic to get advice on how to proceed. Many clinics have a nurse who will triage cases, and you will most likely be asked about travel history and symptoms. If the clinic suggests that you see a doctor, staff might meet you at the front door and provide you with a mask to help prevent infecting others. 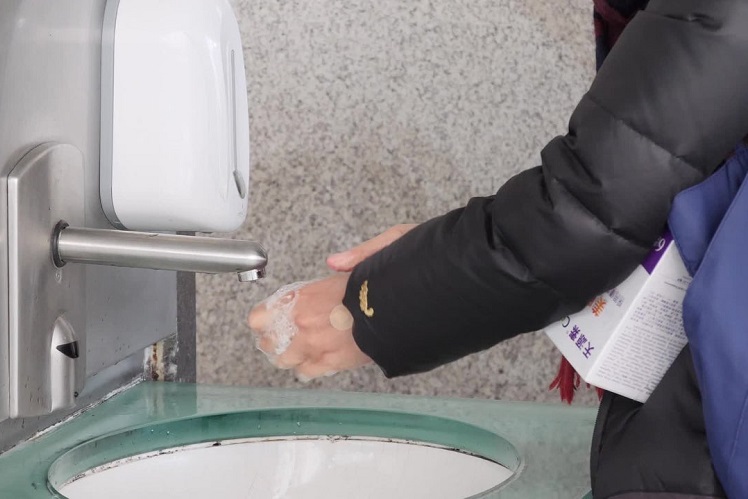 The odds are that something other than the new virus is making you sick. As of Saturday morning, the United States had 340 confirmed cases of COVID-19. That’s dwarfed by seasonal flu, which sickens at least 32 million people each year, according to the U.S. Centers for Disease Control and Prevention. There aren’t any complete statistics on colds, but the CDC estimates the average adult gets two or three in a typical year.

Even if you do have the new coronavirus, the odds you’ll get seriously sick aren’t high, if you’re otherwise healthy. Preliminary data in China, where the virus was first detected, suggests about 80% of cases are mild.

If you’re older than 50 or have a chronic health condition, though, there’s more reason to be concerned. Early data from China shows the virus is most dangerous to people who are older than 80, with 14% of those reported cases resulting in death. It’s possible the actual rate could be lower, if mild cases aren’t coming to authorities’ attention.

Doctors suggest that people who are at higher risk should call their primary care providers to come up with a plan for monitoring their symptoms. People who have asthma or other lung conditions experience flare-ups when they get a respiratory virus, and even people with seemingly unrelated conditions like diabetes are more prone to complications because their bodies are under stress and can’t mount a strong immune response, he said.

Stay home if you have mild symptoms

People with mild symptoms — even if they haven’t tested positive for the novel coronavirus — such as mild fever, cough or sore throat, should isolate themselves at home while they are sick, according to the Centers for Disease Control and Prevention (CDC). That means don’t go to the office, school or public areas, and avoid using public transportation or ride-sharing services.

While at home, you should also separate yourself from other people as much as possible, for example, by staying in a specific room, and using a separate bathroom if one is available, the CDC says.

PETS?  In addition, you should limit contact with your pets until more information is known about whether the virus can spread to other animals, the CDC says. However, there are currently no confirmed reports of people transmitting the infection to their pets.

Isolate yourself from other people

If you’re not seriously ill, it’s better to treat yourself at home, so you won’t spread the virus to people who are more vulnerable and happen to be at your doctor’s office at the same time, Lyn-Kew said.

If you’re caring for a medically vulnerable person and don’t have the option of isolating yourself, it might be useful to wear a mask to avoid transmitting germs, but wearing one in public isn’t likely to protect you from getting sick, he said.

During a news conference Tuesday, state officials also urged people who feel sick to stay home, but it’s not clear how many people will do that. About one-quarter of U.S. workers and two out of five people working in service industries don’t have paid sick leave, according to the Bureau of Labor Statistics. Lower-wage workers — those who can least afford to miss a paycheck — are less likely to have access to paid sick days. And even those who do get sick days sometimes feel obligated to come to work anyway, particularly if they aren’t feeling too bad.

Nearly 500 people working in public health and academia signed a letter calling on the federal government to take steps to protect people from economic hardships if they have to stay home because of illness, but it’s not clear how such a program might work or whether the administration considers it a priority.

Wear a face mask when around others

It sounds simple enough, but good hygiene practices are critical to preventing the spread of the new coronavirus. These include washing hands often for at least 20 seconds (especially after coughing, sneezing, blowing your nose or using the bathroom, and before eating or preparing food); covering your mouth with a tissue or your elbow when you cough or sneeze; cleaning frequently touched surfaces such as doorknobs, tabletops, bathroom fixtures, keyboards and tablets; and avoiding sharing personal items like dishes, eating utensils, towels and bedding, the CDC says. 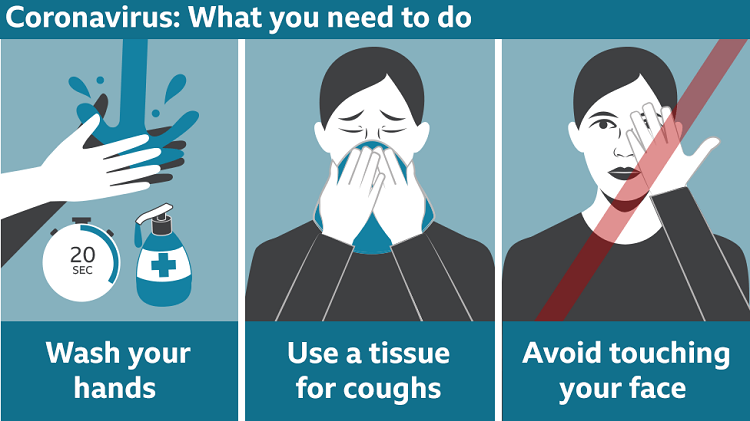 Get comfortable with uncertainty

The state is testing people who have symptoms and risk factors for the new virus, like travel to hard-hit areas or close contact with someone known to have the virus, as well as people who are hospitalized with respiratory symptoms who test negative for more common diseases like the flu.

Vice President Mike Pence, who is leading the federal government’s response to COVID-19, announced Tuesday that the CDC would expand testing to anyone with a doctor’s order. “If you have mild symptoms, you may not need to know” what virus you have, he said.    Most states are taking an “aggressive approach” by testing people who haven’t been hospitalized.

“The sooner we know we have a positive case, regardless of severity of illness, the more effectively we can respond to limit and slow and minimize spread,” one state’s spokeswoman said in a statement. “We will continue with this approach as long as we have the resources and capacity to do so.”

Those with COVID-19 should monitor their symptoms and seek medical care if their symptoms worsen, according to the CDC.    Symptoms that require medical attention include high fever, weakness, lethargy or shortness of breath, Live Science previously reported. Medical care for these symptoms is particularly important for those who are older or who have underlying medical conditions, who appear to be most at risk for serious complications from COVID-19. “The older you are, the shorter the fuse you should have for seeking care,” Dr. George Rutherford, a professor of epidemiology and biostatistics at the University of California, San Francisco, told Live Science in a Feb. 27 interview.