Join co-sponsors the Illinois Institute of Technology Office of Community Affairs, the Chicago South Side Film Festival, The Hampton House, Muhammad Law, and the Greater Bronzeville Community Action Council for a FREE screening of Judas and the Black Messiah on Friday March 26 featuring a special pre-film discussion with Akua Njeri who witnessed and survived the police raid and assassination of her fiancée, Fred Hampton and Mark Clark. Completing the panel is Fred Hampton Jr. and Attorney Khaliyq Muhammad.

Register here and submit your question(s) for the panelists to abunton1@iit.edu by March 25, 2021.

Judas and the Black Messiah is a 2021 American biographical drama film about the betrayal of Fred Hampton (played by Daniel Kaluuya), chairman of the Illinois chapter of the Black Panther Party in late-1960s Chicago, at the hands of William O’Neal (played by Lakeith Stanfield), an FBI informant. Jesse Plemons, Dominique Fishback, Ashton Sanders, Darrell Britt-Gibson, Lil Rel Howery, Algee Smith, Dominique Thorne, and Martin Sheen also star. The film is directed and produced by Shaka King, who wrote the screenplay with Will Berson, based on a story by the pair and Kenny and Keith Lucas. 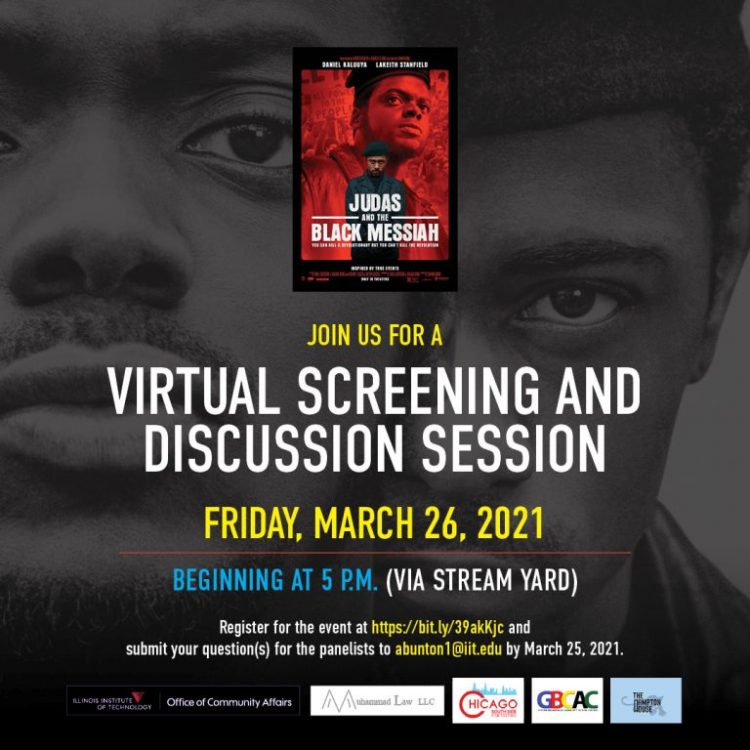 The film has been lauded by critics, who praised King’s direction, the performances (particularly Kaluuya’s and Stanfield’s), and its timely themes. The film earned six nominations at the 93rd Academy Awards, including Best Picture, with Stanfield and Kaluuya both being nominated for Best Supporting Actor. For his performance, Kaluuya also won Best Supporting Actor at the Golden Globes and Critics’ Choice Award, and was nominated at the Screen Actors Guild Awards and BAFTA Awards.