Uno Pizzeria & Grill is celebrating National Deep Dish Pizza Day by offering a buy one, get one free Deep Dish Pizza takeout deal from April 3 through April 5, 2021.  In order to take advantage of the offer, simply order online for takeout from any participating location using promo code “2638.”

The offer is valid for a free pizza of equal or lesser value than the purchased pizza.

You can find a list of participating locations by clicking here… 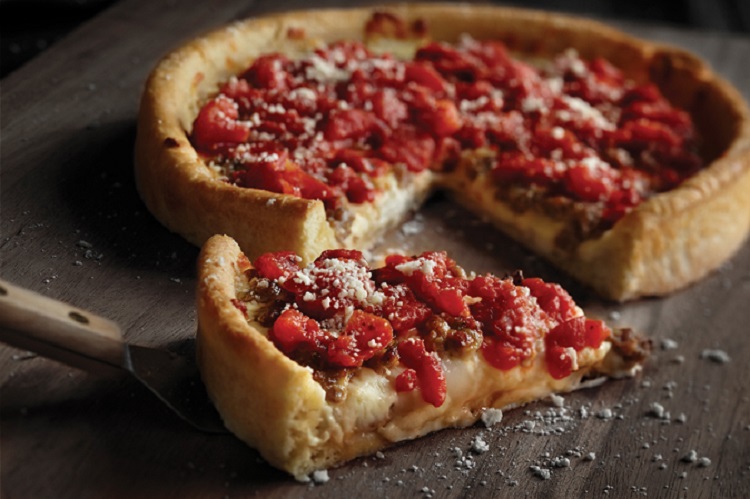 The Uno story begins in Chicago in 1943 when Ike Sewell developed deep dish pizza. He created a recipe that combined authentic Italian spices and quality tomatoes with more cheese than people could believe and then baked it for nearly an hour. When people tasted it, they wanted more of the same and the lines have been forming ever since to get into the restaurant. Deep dish pizza first appeared in a commercial setting when Ike Sewell and Ric Riccardo (born Richard Novaretti) opened the restaurant now known as Pizzeria Uno in 1943. Previously known as The Pizzeria and Pizzeria Riccardo, Uno’s got its name when Sewell and Riccardo opened Pizzeria Due a block away in 1955. Obviously, these men were not particularly creative when it came to naming restaurants, but they were much more impressive when it came to creating food. Well, actually, probably not.

Before the two went into the pizza business together, Sewell worked for Fleischmann’s Distilling Corporation and Riccardo owned Riccardo’s Restaurant and Gallery, a popular hot spot at 437 N. Rush Street from 1935 until 1995. According to corporate lore (which has changed a bit over the years), Sewell’s original plan was to open a Mexican restaurant.

Riccardo, a native of Italy, was willing to go along with the plan until he actually tried Mexican food for the first time. With that idea gone, the two settled on pizza but Sewell pushed for something much more substantial than the Neapolitan version and the two came up with deep dish pizza.

The problem with this story is that there is zero evidence to support the notion that two guys with no known cooking acumen came up with the recipe for deep dish pizza. In fact, there’s no record of anyone ever claiming to have seen either one of them even making a pizza.

So if not them, then who? Well, there are two better possibilities: Adolpho “Rudy” Malnati, Sr. and Alice May Redmond. Not only did both work at Uno’s but each of them unquestionably knew how to make deep dish pizza.

Uno still draws its identity and inspiration from the artisan heritage of the original Pizzeria Uno in Chicago, IL. Each restaurant still makes their deep dish pizza dough fresh every morning, and our Chicago Thin Crust Pizza is jam-packed with bold flavors. Today, we are as passionate about craft beer as we are our pizza. We work with quality brewers to bring you a selection of some of the best national, regional and local craft beers. After all, nothing goes better together than pizza and beer.

Now you can get the original, legendary pizza shipped straight to your home – in Cheese, Sausage, Pepperoni, the Original Numero Uno or the new Spinoccoli in 10-inch deep dish sizes. We carefully freeze and ship anywhere in the U.S.Ship Button