The Federal Emergency Management Agency has begun accepting applications for Americans to receive as much as $9,000 in assistance per funeral. 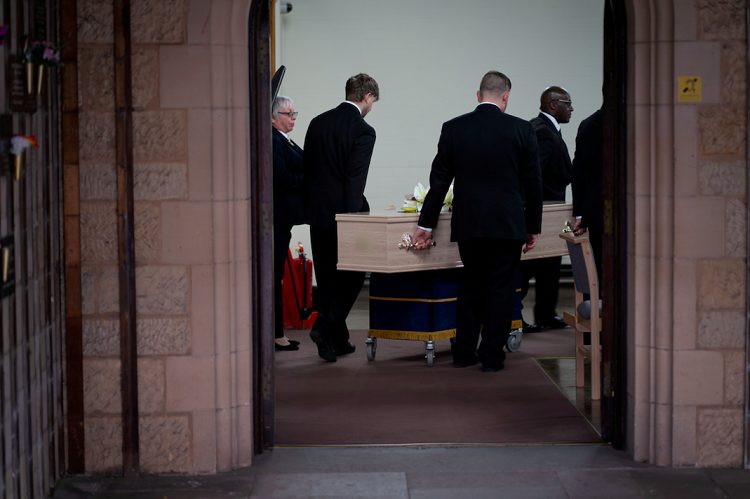 The government will cover up to $9,000 in funeral and burial expenses, including travel, for people who died of COVID-19 after Jan. 20, 2020, unless the funeral was paid for in advance. There are no income requirements or restrictions, so everyone of all social classes are eligible.

“It’s a huge reimbursement,” said the owner of a funeral home in Denver. “… I got a call from one woman who had lost her husband and she was so relieved. She had lost a spouse, so half the Social Security is gone now and the couple didn’t plan for life insurance.”

Phone lines at the Federal Emergency Management Agency, which administers the program, were overloaded April 12, the first day applications were accepted. FEMA has since hired more people to handle the roughly 20,000 to 25,000 calls it receives daily, according to the agency.

Under FEMA’s aid program, a person may apply for aid for multiple funerals, with a maximum of $35,500 per application.

Eligible death certificates must indicate that the death was attributed to COVID-19. FEMA said costs will be reimbursed for funerals held between Jan. 20 and Dec. 31, 2020.

To be eligible for funeral assistance, FEMA says the death must have occurred in the United States or U.S. territories and the applicant must be a U.S. citizen, a non-citizen national or qualified alien. There is no requirement that the dead person was a U.S. citizen.

Those eligible for funeral assistance will be reimbursed by mail or direct deposit. Click here for eligibility requirements and how to apply.

“Our mission is to help people before, during and after disasters,” Acting FEMA Administrator Bob Fenton said in a statement last month. “The COVID-19 pandemic has caused immense grief for so many people. Although we cannot change what has happened, we affirm our commitment to help with funeral and burial expenses that many families did not anticipate.”

Under the aid program, applicants will not be reimbursed for costs that were paid by funeral insurance or other forms of aid.

“The funeral assistance program is historic, not only in the breathtaking scope and magnitude of the program itself, but because of the historic personal losses suffered by so many of our citizens,” FEMA Deputy Director for Individual Assistance Matt Redding said.

It’s common for FEMA to reimburse Americans for funeral expenses after a disaster, such as hurricanes and tornadoes. But since FEMA’s creation in 1979, there have never been this many deaths — about 570,000 nationwide and 6,400 in Colorado due to COVID.

About 120,000 applications were received in the first eight days of this year’s program, according to Redding.

After teh Denver funeral home owner first heard about it, her company sent a letter to past customers who had buried a loved one due to COVID. “They didn’t know about it. They were like, ‘What?’” she recalled.“   I couldn’t believe it wasn’t better advertised. Remember when everybody got the stimulus checks, how advertised that was? This is just like a secret,” Briggs said.

One customer of hers lost two people to COVID, making them eligible for $18,000. A woman whose husband died of the virus will now be able to afford a headstone, according to Briggs. But there are exceptions: One local family Briggs worked with cannot be reimbursed because they pre-planned a funeral through a trust.

More families chose cremations and simple burials over funerals last year due to restrictions on how many people could attend a funeral in-person, statistics from the National Funeral Directors Association show. That kept costs below $9,000 for some, Briggs said, “but if you had a full burial and didn’t own (cemetery) property, you could use the full $9,000 easily.”