Father’s Day is this Sunday, June 20, 2021 and we have all the Father’s Day Freebies.  Many restaurants are celebrating Dad with these 2021 Father’s Day deals, freebies and specials.  Your own Freebies team here has been hard at work, pulling together the best deals on some of our favorite places, so you can say “I love you, Dad!” without breaking the bank.   Keep in mind that these offers are only valid at participating locations and that some offers are actually available for multiple days.

We will update this list as new deals are announced.

BJ’s Restaurant: Buy $50 in gift cards and you can get a $10 bonus card on their website through June 27.

Bonefish Grill: You can get a special filet and lobster tail entrée featuring a 7-oz cut with a seasoned and steamed cold water lobster

Buffalo Wild Wings: Get a $5 e-bonus card when you buy a $30 gift card on the website through Sunday.

California Pizza Kitchen: Buy a pizza, pasta or salad on Father’s Day and get one free on your next visit.

Duffy’s Sports Grill: Dads get a free pint of beer with the purchase of a meal Friday and Saturday.

Einstein Bros. Bagels: Loyalty members can get $2 off breakfast sandwiches through Sunday. You can also get 20 percent off all digital gift cards.

Firehouse Subs: On Sunday, get a free medium sub with the purchase of a medium or large sub, chips and a drink at Firehouse Subs with a coupon.

Fleming’s Prime Steakhouse: Get a special surf and turf three-course meal through Monday in honor of Father’s Day.

Insomnia Cookies: On Sunday, dads who visit an Insomnia Cookies store will receive one free Classic cookie, or get a free six-pack of Classic cookies with any in-store purchase, when they mention the offer. This deal is available in-store only and dads must be present to get the deal. See the details on their Facebook page.

Moe’s Southwest Grill: Get $5 off a meal kit when you order through the Moe’s app. Use the code DADSRULE Friday through Monday.

Ruth’s Chris Steakhouse: The restaurant chain offers a special brunch in honor of dads from 11 a.m.-3 p.m. on Sunday.

Perry’s Steakhouse & Grille: Celebrate with a reinvented 16 oz. Caramelized Prime Rib for $49.50 plus brunch cocktail specials, and more. The restaurant opens at 11 am with the dinner menu available all day.

The Cheesecake Factory: Get a $30 bonus e-Card when you buy a $100 Gift Card online through June 20. The $30 e-Card is valid for dine in or order pickup on their website.

TCBY: Dad can get the first 6 ounces of frozen yogurt for free. See the details on their website.

When is Father’s Day?

Just like Mother’s Day, Father’s Day doesn’t have a fixed date, and so is celebrated on a different day each year.

For the best chance of remembering to get a card on time, try and keep in mind that it falls on the third Sunday of June every year. This means that in 2021, the important date to remember is that Father’s Day is this Sunday, June 20. 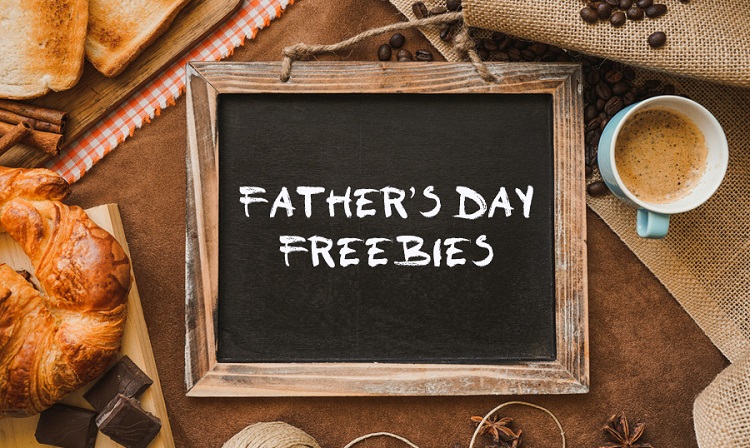 HISTORY OF FATHER’S DAY IN THE USA

The nation’s first Father’s Day was celebrated on June 19, 1910, in the state of Washington. However, it was not until 1972–58 years after President Woodrow Wilson made Mother’s Day official–that the day honoring fathers became a nationwide holiday in the United States. Father’s Day 2021 will occur on Sunday, June 20.

Mother’s Day: Inspiration for Father’s Day
The “Mother’s Day” we celebrate today has its origins in the peace-and-reconciliation campaigns of the post-Civil War era. During the 1860s, at the urging of activist Ann Reeves Jarvis, one divided West Virginia town celebrated “Mother’s Work Days” that brought together the mothers of Confederate and Union soldiers.

Did you know? There are more than 70 million fathers in the United States.

However, Mother’s Day did not become a commercial holiday until 1908, when–inspired by Jarvis’s daughter, Anna Jarvis, who wanted to honor her own mother by making Mother’s Day a national holiday–the John Wanamaker department store in Philadelphia sponsored a service dedicated to mothers in its auditorium.

Thanks in large part to this association with retailers, who saw great potential for profit in the holiday, Mother’s Day caught on right away. In 1909, 45 states observed the day, and in 1914, President Woodrow Wilson approved a resolution that made the second Sunday in May a holiday in honor of “that tender, gentle army, the mothers of America.”

Origins of Father’s Day
The campaign to celebrate the nation’s fathers did not meet with the same enthusiasm–perhaps because, as one florist explained, “fathers haven’t the same sentimental appeal that mothers have.”

On July 5, 1908, a West Virginia church sponsored the nation’s first event explicitly in honor of fathers, a Sunday sermon in memory of the 362 men who had died in the previous December’s explosions at the Fairmont Coal Company mines in Monongah, but it was a one-time commemoration and not an annual holiday.

The next year, a Spokane, Washington, woman named Sonora Smart Dodd, one of six children raised by a widower, tried to establish an official equivalent to Mother’s Day for male parents. She went to local churches, the YMCA, shopkeepers and government officials to drum up support for her idea, and she was successful: Washington State celebrated the nation’s first statewide Father’s Day on June 19, 1910.

Slowly, the holiday spread. In 1916, President Wilson honored the day by using telegraph signals to unfurl a flag in Spokane when he pressed a button in Washington, D.C. In 1924, President Calvin Coolidge urged state governments to observe Father’s Day.

Today, the day honoring fathers is celebrated in the United States on the third Sunday of June: Father’s Day 2021 occurs on June 20.

In other countries–especially in Europe and Latin America–fathers are honored on St. Joseph’s Day, a traditional Catholic holiday that falls on March 19.

Father’s Day: Controversy and Commercialism
Many men, however, continued to disdain the day. As one historian writes, they “scoffed at the holiday’s sentimental attempts to domesticate manliness with flowers and gift-giving, or they derided the proliferation of such holidays as a commercial gimmick to sell more products–often paid for by the father himself.”

During the 1920s and 1930s, a movement arose to scrap Mother’s Day and Father’s Day altogether in favor of a single holiday, Parents’ Day. Every year on Mother’s Day, pro-Parents’ Day groups rallied in New York City’s Central Park–a public reminder, said Parents’ Day activist and radio performer Robert Spere, “that both parents should be loved and respected together.”

Paradoxically, however, the Great Depression derailed this effort to combine and de-commercialize the holidays. Struggling retailers and advertisers redoubled their efforts to make Father’s Day a “second Christmas” for men, promoting goods such as neckties, hats, socks, pipes and tobacco, golf clubs and other sporting goods, and greeting cards.

When World War II began, advertisers began to argue that celebrating Father’s Day was a way to honor American troops and support the war effort. By the end of the war, Father’s Day may not have been a federal holiday, but it was a national institution.

In 1972, in the middle of a hard-fought presidential re-election campaign, Richard Nixon signed a proclamation making Father’s Day a federal holiday at last. Today, economists estimate that Americans spend more than $1 billion each year on Father’s Day gifts.

The Man Who Inspired Father’s Day Was a Single Dad and a Civil War Vet
William Jackson Smart was a twice-married, twice-widowed Civil War veteran and father of 14 children, one of whom dedicated her life to the creation of Father’s Day in honor of her devoted and selfless dad. The story goes that William’s daughter, Sonora Smart Dodd, was attending …read more