Are you sitting at home in your office but the internet router in your house is on the other side of the house? Are you tired of slow internet speeds ruining your home Internet use? Walls, ceilings and distance all conspire to degrade the strength of wireless signals, which can make it difficult to stream movies or even just browse the Web in certain parts of your home. Fortunately, there’s a piece of technology that can bypass the downsides of wireless and bring high-speed Internet to every room in your home.

Powerline Adapters
Powerline networking is a technology that sits between wired and wireless. Rather than shoot network data into the air or through cables draped along baseboards, it uses the existing electrical wiring in your home or office. It also supports the longest distance of the three, though performance heavily depends on the overall electrical wiring and devices pulling power. You can buy adapters that piggyback on your existing electrical wiring to transfer data – and they’re easy for homeowners to install without the assistance of an electrician. Read on to learn more about how to use your electrical system to harness the power of the Internet. Of course, powerline adapters aren’t perfect, and for a variety of factors, they don’t always reach the blazing-fast speeds that they advertise.

In the case of Powerline, AC power transfers at 50Hz or 60Hz, depending on your electrical system. Powerline transmits data between 2MHz and 86MHz but ignores the power-based frequencies. The idea here is to provide network connectivity to devices outside the Wi-Fi range without draping Ethernet cables all through the home or office. The overall speed typically doesn’t match wired networking, and in some cases, Wi-Fi connections. But what Powerline offers over wireless is stability and less latency given the technology isn’t fighting with interfering signals.

The Internet in Your Walls
With Netflix, Spotify, email and Facebook, the Internet has become an integral part of our home activities. Wireless networks are a decent solution for broadcasting your signal through the home, but when they don’t get the job done, you need a more hard-wired way to go. In the past, that might mean paying an electrician to run ethernet cords through the walls. Today, you have access to products like powerline adapters, which use your existing wiring as a data connector.

The adapters are simple to use. All you have to do is connect the device to your modem or router and plug it into a wall socket. Then, anywhere you want to use the Internet, just plug another adapter into the wall and connect it to the device in question. In lieu of plugging in every computer or Internet device in the house, you can also use powerline adapters to set up mini wi-fi networks in various rooms so you can still take advantage of the flexibility of wi-fi without the disadvantages of weak signals from far away routers.
Powerline supports distances up to 984 feet, but adapters don’t communicate in a straight line. Data must pass up and down walls and through the attic, adding unseen distance. Even more, if the electrical wiring in a home or office is too old or the Powerline adapters are spread too far apart, then you’ll likely see far less than the real-world maximum.

Let’s get technical
Most Powerline kits provide two adapters, each with an Ethernet port. One device connects to an electrical outlet and tethers to a modem or router’s LAN port using an Ethernet cable. The second unit plugs into another electrical outlet near the device you want connecting to the network.

Without getting too technical with the hardware and software layers, the first adapter connected to your modem or router converts the Ethernet protocol (IEEE 802.3) it receives to the HomePlug AV2 protocol. That data is then “broadcasted” across the electrical wires, similar to how routers convert and broadcast wireless connectivity (IEEE 802.11). Instead of relying on antennas, adapters transmit through the Line and Neutral power connectors.

Previously, the Line and Neutral wires were only used for a single input and output (1×1). The HomePlug AV2 specification added the Ground wire, enabling MIMO transmissions and beamforming to support Ultra HD video transmissions. The adapter essentially transmits data using any two pairs, like Line and Ground or Line and Neutral (2×2).

All other adapters connected to the electrical system receive both power and data transmission. They filter out the latter, convert it all back to the Ethernet protocol, and push the network connection through the Ethernet port. Some Powerline adapters provide Wi-Fi connectivity too.

HomePlug AV2 is the best
Powerline networking works with all wired devices that can connect to the Internet — all wireless if the adapter has Wi-Fi. All adapters synchronize and work together to create a digital map of discovered stations and their connections, for example, which is useful for network management.

Currently, HomePlug AV2 is the best Powerline protocol, a more flexible iteration of the older HomePlug standard that’s designed to increase speeds, extend coverage, and provide a sleep mode to reduce power, among other notable features.

If you’re shopping for Powerline adapters (more on this later), always remember to look for the latest protocol, because there’s a large increase in quality between generations.

Not Always Perfect
Of course, powerline adapters aren’t perfect, and for a variety of factors, they don’t always reach the blazing-fast speeds that they advertise. Various models claim to clock in at 200, 500 and 1,200 Mbps, but they never really came close to those speeds during testing by PC Advisor. For one thing, your electrical system can slow down the signal with old wires, power fluctuations, noise in the wires and interference from the circuit breaker. Charging up devices like cell phones and tablets can also interfere with the signal. What’s more, the data speed can be limited by the capabilities of the ethernet cord you use or the device itself, not to mention the speed of the internet coming into your modem. Nevertheless, the adapters are still almost always a better bet than wireless when it comes to speed.

Powerline adapters have limitations, too:

If you have any questions about the suitability of your home for powerline adapters, call your local electrician today.

When shopping for Powerline adapter kits, pay close attention to the numbers in their labels. For instance, the TP-Link AV2000 kit boasts up to 2,000Mbps (or 2Gbps), though you’ll never see that maximum speed. Also, look in the specification and be sure the kit supplies Ethernet ports supporting up to 1Gbps, as anything less — like 100Mbps — will cap your connection regardless of the transfer speed through your electrical wiring.

Based on the HomePlug AV2 protocol, this kit packs two identical adapters supporting up to 2,000Mbps. In real-world scenarios, you may see up to 400Mbps.

Each unit provides a built-in power socket so you’re not losing a socket on your electrical outlet, two Gigabit Ethernet ports, and a one-touch pairing button that synchronizes with the other adapter(s). LEDs embedded on the side indicate strong (green) and weak (red) connections.

As we mentioned earlier in the article, the HomePlug AV2 protocol supports a 2×2 connection, which translates to two send streams and two receive streams. Other features include noise filtering, beamforming, and a power-saving mode.

Netgear’s PL1200-100PAS kit boasts speeds of up to 1,200Mbps, though real-world speeds may reach just above 380Mbps maximum. Keep in mind that this speed is based on the local network and will not improve your internet connection if you’re only paying for a 200Mbps subscription.

Unfortunately, this kit of two lacks built-in power sockets, so you’ll lose a socket in the wall’s electrical outlet. These two adapters only supply one Gigabit Ethernet port each as well, limiting your physical connections — even more so on the model tethered to your modem or router.

Other notable features include a physical button to enforce encryption, connection health indicators, MIMO and beamforming connectivity, and a quick plug-and-play setup — no additional software required.

Based on the HomePlug A2, this whole-home kit contains two adapters with pass-through power sockets and a Gigabit Ethernet port. Similar to the other kits on our list, each adapter comes with connection health indicators and an easy-pair button for your convenience. 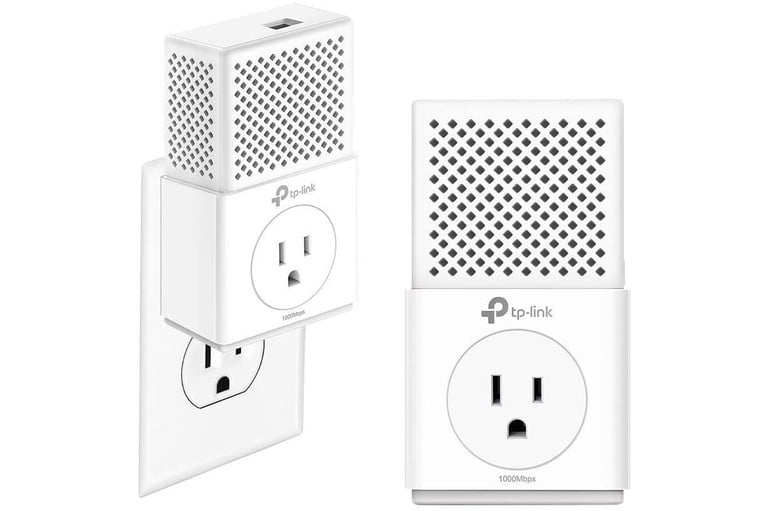