Check out this free concert with lots of awesome jazz acts!  On August 6, Martin Luther King Drive from 39th to 37th will be alive with music during the the inaugural FREE Bronzeville Neighborhood Jazz Fest on August 6, 2022. Curated by music manager Frank Goss, the festival pays homage to the historical neighborhood of Bronzeville, and jazz innovators like Dinah Washington, Louis Armstrong and Nat “King” Cole,. This area was known for its rich music history of Jazz and Blues influenced and powered by the Great Migration of Black from the South to North in the 20s, 30s, 40s, and 50s.

Admission and parking are free. AARP, Blue Cross Blue Shield, Mariano’s and CIBC will be giving away free gifts to all attendees. 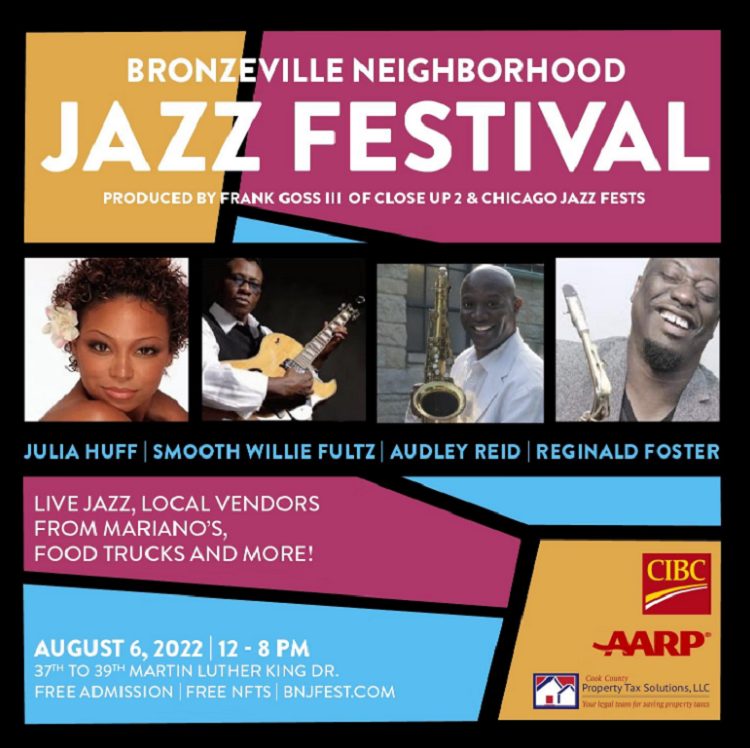 This community is known for its rich history and a flourishing, modern-day renaissance. Bronzeville’s cultural contributions are vast — it was once home to Pulitzer Prize-winning poet Gwendolyn Brooks, civil rights activist Ida B. Wells, legendary musician Louis Armstrong, and more.

Throughout the 1950s, the neighborhood was known for its bustling commercial areas, popular music clubs, and community of intellectuals and social activists. Today, Bronzeville is embracing its legacy as a mecca for civil rights, jazz, blues, and gospel music. You’ll also find an array of coffee shops, bistros, galleries, libraries, monuments, and restaurants, alongside spectacular Victorian-era architecture and 19th-century mansions.

Make sure to check out the Robert W. Roloson Houses, the only row homes that Frank Lloyd Wright ever built, and stroll by the former residences of great entertainers like Louis Armstrong, Nat King Cole, and the Marx Brothers, plus change-makers like Bessie Coleman, the first African American woman to hold a pilot’s license.

Keep an eye out for public art: In the midst of all that history, look for striking public art installations, like a sculpture-adorned stretch of Martin Luther King Drive that features a Monument to the Great Migration, the Bronzeville Walk of Fame, and The Victory Monument. You’ll also find the Ida B. Wells Monument just a few blocks from her former residence.

Grab a local bite: If you’re hungry, check out Truth Italian for a soulful take on classic Italian cuisine. And Bronzeville Winery has a menu of comfort food (like shrimp and grits) and lighter fare, plus a patio and live music.

REGGIE FOSTER FREE JAZZ CONCERT:  A throwback to the days of the musician, Reggie showcases his skills in great arrangements, chord changes and catchy rhythms. Reggie began playing professionally at the age of 20, and over the next 10 years has provided his different flava to numerous gospel professional recordings, such as Ricky Dillard, Carlis Moody, SWV (Saints with a Vision), Tyrone Block/LSD, Ty Tribbet, Doug Williams of the Williams Brothers, James Greer, Karen Clark Sheard, and various other artists. When it comes to Smooth Jazz, Reggie Foster is on a totally different level in regards to his compositions and arrangements. This is what sets him apart from other musicians out there. He takes from a range of inspirations and creates a sound that is beyond Smooth Jazz. You don’t listen to Reggie: you experience him.

JULIA HUFF FREE JAZZ CONCERT:   When a gifted singer spends well over a decade honing her craft, all the while wrestling with the sweet-n-sour sauce of life, it makes an exceptionally stunning story for a debut recording. Julia Huff and her understatedly titled first offering Meet…Julia Huff, are just such entities. The Chicago-based chanteuse sacrificed a budding career as a hard news journalist to return to the path of singing she was born to strut with high favor and love power. With music produced, arranged and largely composed by the legendary Jerry Peters (Phyllis Hyman, Earth Wind & Fire), Meet…Julia Huff introduces the listener to a 5-star talent as comfortable with cabaret jazz as she is with high gloss soul-pop. Make no mistake – Julia Huff is a singer whose time has finally arrived.

Julia Huff has been steadily and faithfully working what’s left of the fabled Chicago nightclub circuit 3 to 4 nights a week gigging the old fashioned way with her group Julia Huff & The Company Band. She’s played every venue from the sadly closed Jilly’s and The Back Room to festivals such as “Taste of Chicago” and the Main Stage of “Juneteenth,” to headlining a host of private V.I.P. receptions and corporate industrials. She also made Detroit a home away from home with frequent visits to all of its casinos and, of course, Baker’s. She is best known for her loving “A Tribute to Phyllis Hyman” which packed houses in many cities. Ms. Huff also took her act overseas for acclaimed extended engagements.

“I’ve played prestigious clubs in Russia, including Moscow, promoted with radio and television interviews,” Julia shares with pride. “Before that, Japan was my first time out of the country. I was in Gion and Kyoto at Select Repos where I played for a month…amongst the real geishas! I had everybody from a big time Sumo wrestler to the President of Toyota in attendance to see me.”

Singing began for Chicago-born Julia Huff when she belted out The Carpenters’ “We’ve Only Just Begun”…at her kindergarten graduation! From that point until college, she sang everywhere from church to talent shows. Once at university level, however, Julia pursued another burning dream to be a news journalist. After earning her broadcasting degree, she landed at City News Bureau, covering many top local and national political stories, and was also an on-air reporter at NBC affiliate WICD-TV in Champaign, Illinois. But the reality of that grind had Julia rethinking her career. Besides, the Chicago nightlife was calling…one of the last cities a girl can make a living in singing.