Are you ready for the FREE Chicago Air & Water show? It is rapidly approaching and the Blue Angels will be performing – Aug 20-21

The City of Chicago and Department of Cultural Affairs and Special Events (DCASE) proudly present the 2022 Chicago Air and Water Show, August 20 and 21 along the lakefront from Fullerton to Oak Street, with North Avenue Beach serving as show center from 10am to 2pm daily. Established in 1959 and one of the largest free admission events of its kind, headliners of the 2022 show include the U.S. Navy Blue Angels and the U.S. Army Parachute Team Golden Knights, who are dedicating their performances to the memory of Rudy Malnati Jr.

The U.S. Navy Blue Angels have been astounding audiences since 1946 with their gravity-defying flying, commanding presence and precision maneuvers now performed in their brand-new F/A–18E Super Hornets. The brave men and women of the U.S. Army Parachute Team Golden Knights will inspire spectators as they jump out of an aircraft 12,000 feet above the earth’s surface to a perfect target landing on North Avenue Beach.

For the first time, the U.S. Air Force Heritage Flight and U.S. Navy Legacy Flights will be presented in the same Air and Water Show; a rare event for any air show. The U.S. Navy has provided an additional F-35C Legacy II to its Legacy Flight to incorporate a “Missing Man” dedication to Rudy Malnati Jr. 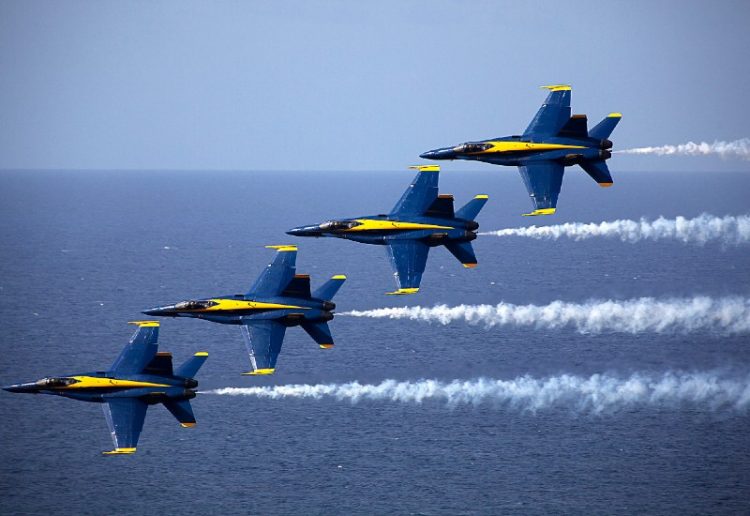 1. The team was established by one of America’s great Naval Heroes

At the end of World War II, naval hero and Chief of Naval Operations Adm. Chester W. Nimitz, ordered the formation of a flight demonstration team to keep the public interested in naval aviation and to boost Navy morale. The team was established on April 24, 1946, and performed its first flight demonstration on June 15, 1946, at its home base, Naval Air Station (NAS) Jacksonville, Florida, flying the Grumman F6F-5 Hellcat. 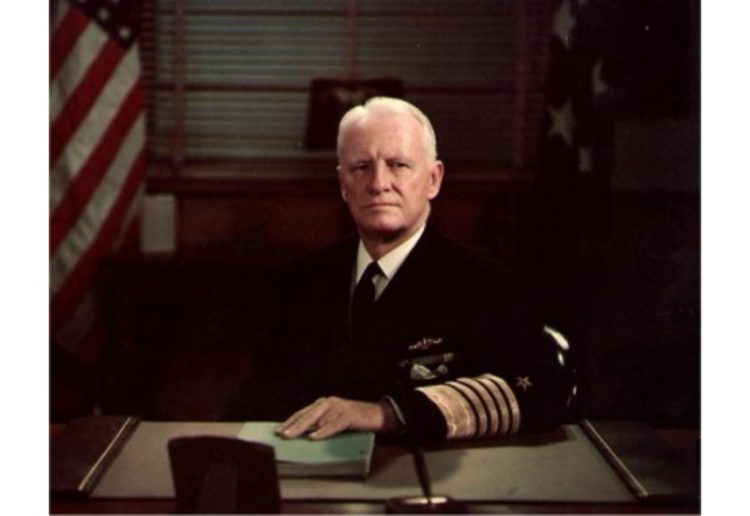 If you’ve ever seen the Blue Angels fly, you’ve likely noticed the trail of smoke left behind by the aircraft. The non-hazardous smoke is produced by pumping biodegradable, paraffin-based oil directly into the exhaust nozzles of the aircraft, where the oil is instantly vaporized into smoke.

Not only does the smoke provide a path for spectators to follow, it also enhances safety of flight by allowing solo pilots to see each other during opposing maneuvers and conditions of lowered visibility.

3. The Hornets fly as close as 18 inches apart

During the Diamond 360 maneuver, the Hornets will fly just 18 inches apart from each other! In the maneuver, Blue Angels #1 leads a pack of four who fly closely – just 1 ½ feet from each other – in a diamond shape. In fact, it’s so close, that in 2019 two jets touched while practicing a Diamond 360. There were no injuries and no damage to the aircraft, other than a small scratch. 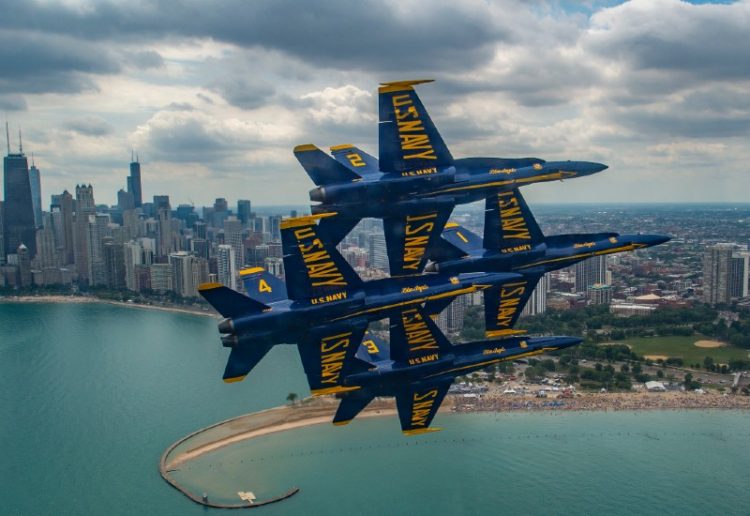 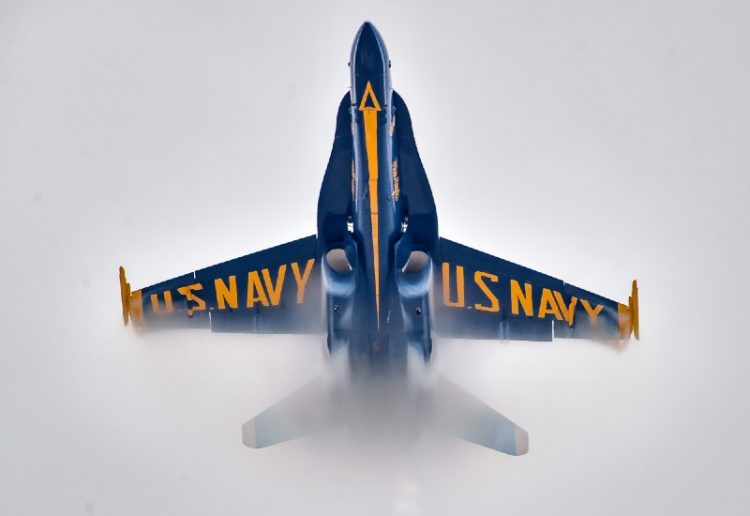 5. All the Blue Angels are Carrier Capable

Each Blue Angel aircraft is capable of being returned to combat duty aboard an aircraft carrier within 72 hours!

There are only a few differences between the Blue Angel Hornets and the fleet model: The Blue Angel F/A-18s have the nose cannon removed, a smoke-oil tank installed, and a spring installed on the stick which applies pressure for better formation and inverted flying. Otherwise, the aircraft that the squadron flies are the same as those in the fleet. 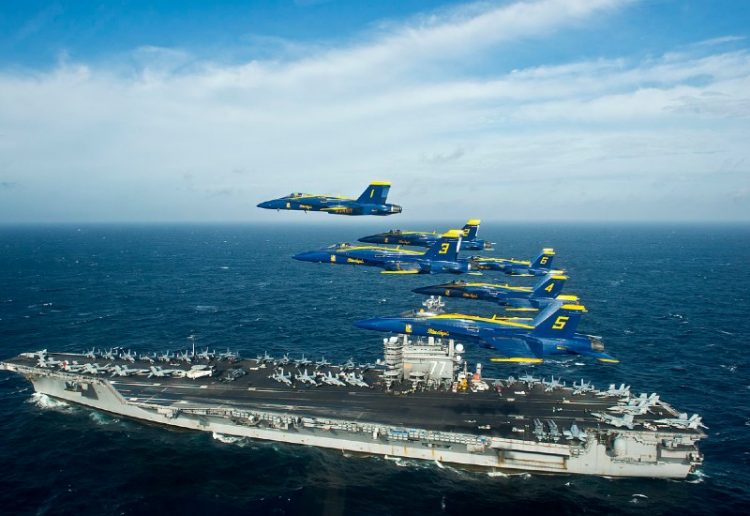 6. The F/A-18 Hornet has served as the demonstration aircraft for 34 years

The Blue Angels began flying the Boeing F/A-18 Hornet in 1986, on the team’s 40th Anniversary. On November 4, 2020 they conducted their final flight with the legacy F/A-18 C/D Hornets over Pensacola, Florida, marking the end of its service life with the flight demonstration team.

The Hornet is the Blue Angel’s longest serving demonstration aircraft. 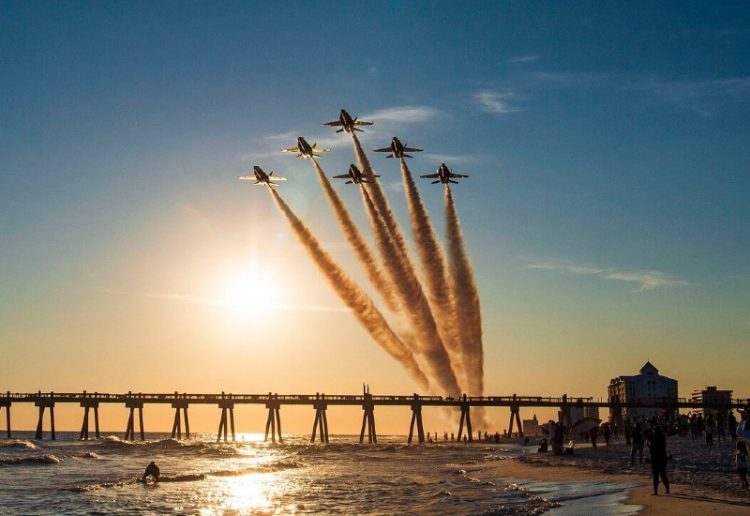 7. The Blue Angels transition to the Super Hornet in 2021

The Super Hornet is 25 percent larger, can fly 40 percent further, remain on station 80 percent longer, and carry more weapons than its predecessors. The Super Hornet F/A-18 E/F models have deployed with battle groups since 2001.

The Blue Angels plan to kick off its 75th season with the Super Hornet starring in the 2021 year’s first air show at Naval Air Station Jacksonville, Florida. The Blue Angels are slated to appear at a total of 30 locations throughout the year. 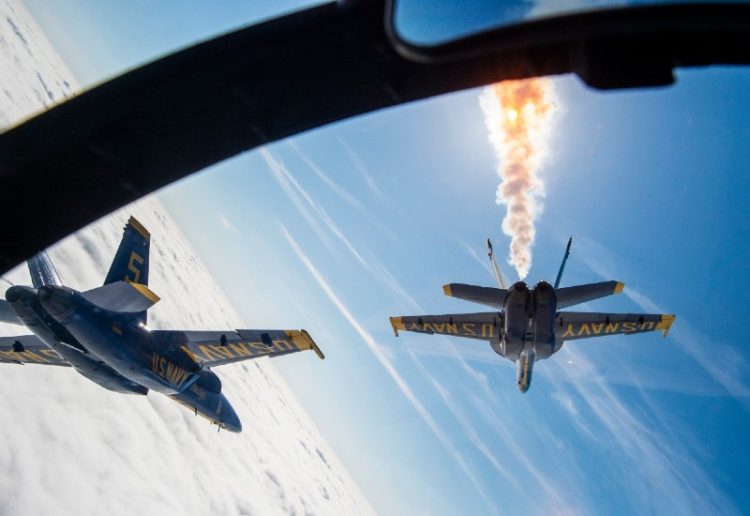